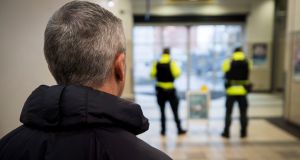 A new police tactic in which plain-clothes officers watch how people react to uniformed colleagues has led to a number of arrests in Belfast.

Their aim is to spot individuals who act suspiciously when they see police nearby, perhaps by attempting to hide or make off at pace in the other direction.

Servator, the Latin for “watcher”, was trialled by the Police Service of Northern Ireland (PSNI) throughout 2019, including during the Open Championship golf tournament at Portrush in July and a six-week deployment in Belfast city centre in the lead-up to Christmas.

The Servator team was on the ground 70 times in Belfast from November 17th to December 28th, patrolling shopping areas across the city and the main transport hubs.

During that time it made nine arrests, reported three people for summons, issued four Community Resolution Notices and dealt with more than 150 other individuals by other means, such as by issuing advice or engaging in conversation.

Several drugs seizures were made as a result of the deployments and the arrests included two suspected members of a city centre pick-pocketing gang.

Servator was first developed by the City of London police in 2014 and has since been adopted by 23 other forces across the UK.

Superintendent Pat Foy, the PSNI’s strategic lead for the project, said the success of Servator was its unpredictability.

“The plain-clothes officers are specially trained, they know the tell-tale signs, they know when someone is trying to avoid police,” she said.

Ms Foy said the feedback from the public and business community had been “very positive”.

“Over the course of the six weeks the team visited the Christmas markets, shops, cafes and licensed premises to offer reassurance and advice on keeping staff and customers safe,” she said.

“Officers engaged with council workers, post workers, security staff, street performers and members of the public who all played an important role in helping us keep people safe by being our eyes and ears and reporting suspicious activity and we’re grateful for their support.”

It is anticipated that the dedicated Servator team will conduct patrols in towns and cities across Northern Ireland in 2020.