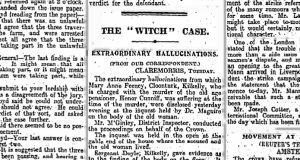 Newspapers called it ‘The Witch Case’, very nearly across the board.

Newspapers called it “The Witch Case”, very nearly across the board. Similar headlines are rare in the archives of Irish newspaper titles; the most well-known and written-about being the severe abuse and murder of Bridget Cleary by her husband in 1895. A lesser-known story, less than 20 years later, again pulled the “witch” angle to the top of news reports.

Honor Cunniffe, a pensioner, was killed by Mary Anne Feeney in Co Mayo in 1911. The details of the case reported in newspapers and held in official files are morbid and sad. Mary was suffering from severe mental illness at the time and said she believed her elderly lodger to be a witch following a vision of the Virgin Mary. This detail led to the ubiquitous, spurious headline choice: “The witch case”.

But the story is more than the sum of news reports about an episode of mental illness and a brutal, unfortunate death. It is also an example of a full set of case files which give some insight into the treatment of crimes with a backdrop of “criminal lunacy” in the very early 20th century.

The story begins with the discovery of the murder. It was Saturday, June 10th, 1911. A woman named Ellen Byrne was the first person to encounter Mary Anne while walking in Cloonturk near Kilkelly, Co Mayo. The latter looked frightened, and carried a small statue of the Virgin Mary.

Ellen’s statements at Honor Cunniffe’s inquest, which was held in the open at the gable end of the house where she died, were reported in The Irish Times in the following days. Her full testimony at an inquiry later that month, held in the files of the case, provides a longer version of the same story.

Ellen was getting water at the well, when she saw Mary Anne. “She came up to me,” Ellen recalled. “She said: ‘I have the old witch killed now; don’t be afraid of me Ellen.’ She said she got power at 3 o’clock yesterday to banish all the devils away across the hills. She said the Blessed Virgin gave her power to kill the witch at 3 o’clock on the morning.”

Mary Anne wished to go for the sergeant. Ellen brought her instead to the house of a nearby neighbour, who said Mary Anne should go to Kilkelly barracks herself. And she did, stopping back at her own house to get a shawl, where, in fact, Honor Cunniffe was still alive, but badly injured.

On her way to Kilkelly, Mary Anne encountered Patrick Kilkenny and his grandmother Margaret Lenehan, who were on their way to Knock in a car. Mary Anne relayed the same story, to which Margaret said: “The lord help you, I’m afeared you’ll suffer.” Again, she went on her way.

A Royal Irish Constabulary policeman named Patrick Dockery next met her on the road. On hearing Mary Anne’s claims, he took her to the barracks, leaving her with another constable named Thomas Breen, to whom she again told the story. Meanwhile Dockery and his sergeant, Thomas Doyle, returned to the house to investigate the claims.

Mary Anne had severely beaten the pensioner using the statue and a large wooden door bolt, according to official records. After travelling to the scene at Cloonturk, Sergeant Doyle found the blood-stained bolt outside the house. Inside, Honor Cunniffe was unclothed on the floor in a pool of blood, her head badly injured. The severity of Honor’s wounds were depicted in a detailed deposition by the doctor who performed her post mortem. She had extensive head injuries, any of which could have caused death.

Honor died at 11am and Mary Anne was charged with murder at 11.30am.

The background of the women is barely, if at all, touched upon in news reports, which mainly focus on the crime. But it pops up in parts of some records. Mary Anne mentioned that Honor had lived in the house since before Christmas, 1910. The census return from 1911 shows the two living in the house at Cloonturk in April 1911 - two months before the murder. Honor at that time was 74, though death records showed she turned 75 before June 10th. Both women were Roman Catholic.

Mary Anne was 35 that year, and her “education” field says she could read and write; Honor could not. Honor could speak both English and Irish, while Mary Anne could only speak English. “General servant domestic” is the entry for Mary Anne’s occupation and Honor’s is simply “pensioner, old age”. Honor is listed as single and Mary Anne was a widow; in the field where the length of the marriage should go, the number 3 appears, with a line through it.

Arrest records give a physical picture of Mary Anne. She was 5 feet tall, with brown hair, blue eyes and a “fresh” complexion. She had a burn mark on her left cheek.

Those facts are interesting, but little use in giving a direct portrayal of the women’s relationship prior to June 10th, 1911. One witness who gave evidence at an inquiry on June 29th, however, did; a farmer named Michael Snee, who met Honor at the well on his property on June 8th. Honor’s health was well that day, though she had been poorly previously. From his testimony, it appears that Mary Anne had taken great care of Honor and she was grateful.

Mary Anne was conveyed to prison following the charge. At this point, she had not been declared “insane”, and would have to stand trial at the summer assizes. At the June 29th inquiry, Mary Anne herself gave a detailed account of the events leading up to the death of Honor Cunniffe. Mary Anne’s is the longest deposition in the file and left little doubt as to the conclusion of the case.

In short, fearing a plague of rats, dirt and mice following a warning by the Virgin Mary, Mary Anne insisted that Honor take her bed out of the house to air so she could get a Mass said. Honor, at the time, was also signing over her new pension book to Mary Anne, which the latter felt she could not receive until she had the house cleansed. The argument and severe ill-treatment of Honor by Mary Anne lasted a couple of days, leading to a confrontation in which the elderly boarder was killed. In her lengthy statement, she does not mention Honor being a “witch” - she only apparently used that word in telling the story to the people she met on June 10th.

Mary was brought forward at the Mayo summer assizes on July 14th. Dr Ellison of Castlebar Asylum gave evidence that she was “insane” according to a short report at the bottom of page 9 the following day in The Irish Times. The jury deemed her incapable of pleading and she was ordered to be confined at the Dundrum Criminal Lunatic Asylum.

Statements by Dr Ellison show he had diagnosed her with “melancholia” - a now-defunct term - in the days between her arrest and the trial, more than a month later. She had been all the while detained at Castlebar Prison, where she had been sedated, according to an extract from the journal of the medical officer at the prison.

A transfer request was sent to Dublin castle on the day of her hearing at the assizes. The official order and transfer from the prison to the asylum at Dundrum would not occur until the 21st of July - nearly a week after the conclusion of her case in court. The final application for transfer is a simple form with “Criminal Lunatic” in caps at the top. It contains brief details amid boiler-plate, printed text, the last line of which reads: “Remove to Lunatic Asylum accordingly.”

“Criminal lunatic” was the term used for people in Mary’s position. The definition in the Lunacy (Ireland) Act 1901, was any person (as deemed by the king or lord lieutenant or the admiralty) whose safe custody is authorised to give order; or any person “directed to be removed to an asylum or other place for the reception of insane persons” - either by the lord lieutenant, secretary of state or the admiralty.

In contemporary indices for criminal files, the term is often handwritten in large letters, in red ink, to quickly differentiate those crimes from others. Another common refrain in those cases has to do with the open-ended nature of many of the sentences - it applied to Mary Anne: she was to be detained “during his pleasure of his Excellency the Lord Lieutenant.”