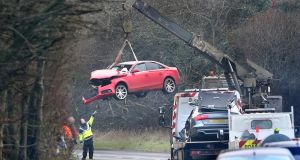 The scene of a fatal crash near Maghera, Co Derry, where a 19-year-old man was killed. Photograph: Margaret McLaughlin

A 19-year-old man became the first person to die on Ireland’s roads this year when his car was involved in a collision in Co Derry at around 2.30am on New Year’s Day.

Michael Óg McKenna, from the Maghera area, was fatally injured in the incident on the Moneysharvan Road between Maghera and Swatragh.

The woman driving the other car and two teenage passengers were taken to hospital to be treated for their injuries, which were not believed to be life threatening.

The Police Service of Northern Ireland (PSNI) appealed to anyone who witnessed or has information about the crash to contact them on 101.

The young man’s death came as the Road Safety Authority (RSA) and the PSNI published figures which showed that more than 200 people were killed on Irish roads last year – 148 in the State and 54 in Northern Ireland.

The figure for the State represented a 4 per cent increase on the 142 fatalities recorded on the roads in 2018, which RSA chairwoman Liz O’Donnell said was “deeply saddening”. The figure for 2018 was the lowest since records began in 1959.

“We must respond to this increase the same way we have responded to previous setbacks. Rather than being disheartened, it should spur us and our road safety partners into renewed effort,” Ms O’Donnell said.

Drivers accounted for the highest number of road users who died last year at 81 with 27 pedestrians, 16 passengers, 16 motorcyclists and eight pedal cyclists dying as a result of incidents on the roads. The number of fatal collisions increased from 135 to 137 year on year.

The number of road deaths in the State has been consistently under 200 since 2010.

Minister for Transport Shane Ross said “the only way to respond to these needless deaths and injuries on our roads is through action, not words” and he urging road users to take “greater responsibility” for their actions.

“We can do this by slowing down, not driving while impaired through drink, drugs or fatigue, by not driving while using a phone, by wearing a seatbelt and always sharing the road more carefully with pedestrians and cyclists.”

The PSNI said the 54 people killed on Northern Ireland’s road last year was the second lowest since records began in 1931.

The figure has been falling each year since 2014, when 79 people died and was one fewer that the total for 2018.

Twenty-six of those who died in road incidents last year in the North were drivers, with fifteen pedestrians, eight passengers in cars, three motorcyclists and two cyclists also dying on the roads.

PSNI Assistant Chief Constable Alan Todd said that despite the downward trend “far too many people” are killed on Northern Ireland’s roads every year.

“The simple reality is that many collisions can be avoided,” he said. “Not paying full attention, poor positioning on the road, excess speed for the conditions and people driving under the influence of alcohol or drugs remain the most common causes of the most serious collisions which kill and injure people.”

He added: “As we start a new year, please resolve to have a greater focus on road safety, so we can prevent collisions and save lives.”