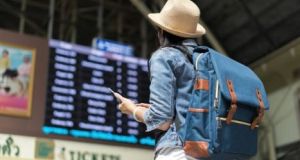 Refusals of leave to land at Dublin Airport had reached 5,687 by the end of November, involving people from all over the world. File photograph: Getty

Checks on those entering Ireland have been changed in recent months because some immigrants were destroying fake documents once they disembarked from airlines, Minister for Justice Charlie Flanagan has said.

Mr Flanagan said such people were destroying their documents after they stepped off an aircraft but before they reached passport control, where some would then apply for international protection.

“We have had instances where people departed planes and destroyed papers between their departure from the plane and the migration post,” he said in an interview with The Irish Times.

This trend led to checks being moved back to the steps of the aircraft itself and those with fake documents have been refused entry.

The number of foreign nationals refused permission to enter the Republic has significantly increased after this crackdown.

Airlines have been told to take such individuals back on a return flight before any opportunity to claim international protection arises.

The Irish Times has learned that Albanian and Georgian nationals have been the main focus of the new measures at Dublin Airport. As a result, applications for international protection, or asylum, from Albanians and Georgians plummeted in October after earlier significant increases.

Refusals of leave to land at Dublin Airport had reached 5,687 by the end of November, involving people from all over the world.

When figures for December are added, the number of people refused leave to land at Dublin Airport in 2019 was expected to be between 25 and 30 per cent higher than in 2018 when 4,797 people were refused.

Garda sources said the airlines have now become more aware they will be forced to take passengers back. Because of that they have begun to more closely check the travel documents of Albanians and Georgians before they board flights.

Mr Flanagan, however, declined to name or discuss individual countries but said: “Persons coming from safe countries of origin will have their applications dealt with pretty quickly and many of them will not be denied access.

“It’s important that our immigration laws are robust and that they are enforced and what we are seeing, particularly at our ports and airports, is a rapid turnaround. And people who don’t have an entitlement under our laws to reside here are being denied access.”

He said there is evidence that many immigrants enter Ireland and then cross to the UK, but insisted Ireland is “not a soft touch” and said the “integrity of the Common Travel Area is vitally important”.

Taoiseach Leo Varadkar had his passport checked as he disembarked an aircraft from Berlin to Dublin upon his return from a private visit in October. Mr Flanagan said he had “experienced that myself”.

In the first nine months of the year, more Albanians and Georgians applied for international protection than any other nation; accounting for just over 38 per cent of all 3,762 applications received.

In September alone, 191 Albanians and 117 Georgians applied for international protection, double the numbers seen just months earlier. But in October, as a result of the new checks at Dublin Airport and great awareness by airlines, the numbers fell to 90 Albanians and 58 Georgians.

While this was still higher than any other nationality, Garda sources said it was the first time significant progress had been made in stemming applications from Albania and Georgia.