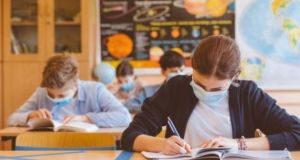 Teachers’ unions have warned that some schools face a shortage of teachers in the months ahead, owing to illness and upcoming retirements. Photograph: iStock

Schools are facing a chronic shortage of teachers due to absences as a result of illness and retirements in the months ahead, trade unions have warned.

Trade unions in the education field told the Oireachtas committee on Covid-19 on Wednesday that they had strong concerns about members with significant illnesses who had been told by the occupational health service that they must return to work in schools.

The committee heard that a new “robust” appeals system will now be put in place.

Unions warned that if teachers were unable to return to schools alongside forthcoming retirements and problems with recruitment, it could lead to serious staff shortages.

He said there were members who had four or five consultants advising them against going back into the school building.

The occupational service, on the other hand, had “a very high bar” set by the Government about the definition of what constituted high risk.

“The danger with this is that if the appeal mechanism is not working, we will have a lot of people declared sick by their GPs or their consultants . They will not be returning and in a case where a school has multiple absences, even the [new] supply panels will not be able to fill the gaps.”

Teachers’ Union of Ireland (TUI) general secretary Michael Gillespie said there was a lack of teachers in certain subjects in secondary schools and recruitment was proving difficult.

He said in a month’s time delayed retirements were going to hit the second-level system and there would not be enough teachers to replace those leaving.

“Both problems, the number of teachers who are at very high risk who will be clearly identified over the coming weeks who will not be able to teach in their schools plus the retirements that are coming, mean that we in second level believe there will be a chronic shortage of teachers in some schools.”

He said more than likely the worst places affected will be schools in urban areas, particularly Dublin.

The general secretary of the Association of Secondary Teachers, Ireland (ASTI), Kieran Christie, said schools advertising positions were getting few, if any, applicants. He said “the portents were not good”.

Mr Christie said the ASTI was also receiving a significant number of calls from teachers with illnesses including chronic kidney disease, cancer and serious heart disease.

“For the avoidance of doubt, ASTI is demanding that the Minister for Education make alternative arrangements, such as working from home, for teachers and students who are in the ‘high risk’ category.”

Mr Gillespie said TUI members would not accept any departure from the public health guidance, including the necessity to maintain a physical distance of no less than 1m and preferably 2m in schools.

“Unfortunately, we have had reports in recent days of schools that have not yet put the necessary measures in place, we reiterate again that the TUI will not permit non-compliance on this key issue.”

At a later sitting of the committee, Minister for Education Norma Foley emphasised that the criteria being used to assess the health of teachers was the same as that used across the wider public service.

In relation to the new calculated grades process, she responded to claims that up to 20,000 students who have applied for college courses this year may be disadvantaged due to more generous grades being issued this year.