‘It’s the worst we’ve ever seen’: Flooding in west leads to school and road closures 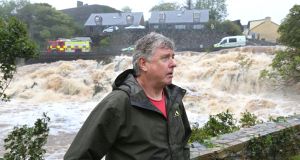 Patrick Guy at the back of his house at Riverside beside the Owenglin river as water pours down the waterfall after earlier flooding. Photograph: Joe O’Shaughnessy

Up to 50mm of rainfall was recorded in the Connemara area overnight on Tuesday and on Wednesday morning, as a weather system in the northwest pushed south, Galway County Council said in a statement.

Fire services evacuated people from 17 properties in Clifden after the town was significantly impacted by flooding amid the rainfall, including from residences close to the Station House Hotel. A holiday village was also evacuated. There were no reports of injuries.

Fiona Shanahan, whose house was flooded, said the water “literally came out of nowhere”. She was asleep upstairs in the home she shares with her son, his wife and three children, when a neighbour telephoned to alert them to the rising water levels.

“At 6 o’clock there was nothing, the river was fine. By 7 o’clock the back yard was beginning to fill up with water … it came in downstairs, it came in the front door and the back door.

“We had to stay put. There was no way of getting out. The children were pretty freaked out,” she said.

Around 12 noon when the water subsided they were able to leave and are now staying with relatives and a neighbour but there remains, she said, a nine to ten foot hole in her front yard which resembles a swimming pool, carved out by the force of the roaring floodwaters.

“It was unbelievable the force of the water. It had some power. The noise from it was unreal. People locally are in shock. It’s an absolute blessing nobody was injured”.

Fiona, who is vice president of Connemara Rugby Club, lives just over the river from the Clifden Showgrounds on the Ballyconneely Road and has been there for 25 years. “Nobody can recall this ever happening before,” she added, mentioning her home was ironically called Waterfall House.

It is difficult to know yet why the flooding occurred, she says. “I’m sure there will be an explanation somewhere along the line”.

The rain was unexpected, with no weather warning for the deluge of rain in the area until 9am on Wednesday.

“For a lot of people the first they knew of it was when they woke up and the roads were like rivers. The Sky Road near where I live was just a torrent of water. It’s the worst we have ever seen, really shocking,” said local councillor Eileen Mannion. She said people might have been able to get sandbags if they knew of the situation in advance.

Manager of the Abbeyglen Castle Hotel in Clifden Brian Hughes said the situation was “much worse” than recent storms because it was affecting people’s houses. “It’s just terrible. Absolutely awful.”

Dramatic videos on social media showed wild and raging flows in the river. Several roads were impassable early on Wednesday as the N59 between Galway and Clifden was flooded at a number of locations, including Maam Cross, Recess and Kylemore Abbey.

Householders began returning to their dwellings in the afternoon as floodwaters receded as the tide went out, but the damage to property is estimated to run to thousands of euro.

While the waters began to recede on Wednesday afternoon, Galway County Council remained “on alert” on Wednesday night, as a yellow level rain warning remained in force until 9pm for Connacht, Cavan, Monaghan and Donegal.