Deliveroo riders held a vigil on Wednesday for their late colleague Thiago Cortes who was killed in Dublin on Monday night.The Brazilian had been working as a cycling courier for the food delivery company when he was struck by a car. 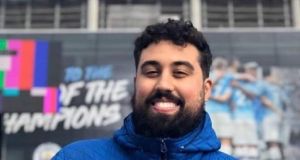 Thiago Cortes died after his bike was struck by a car at North Wall Quay. Photograph: Facebook 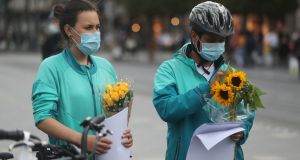 Thiago Osorio Cortes, the cyclist who died after he was struck by a car, was “very happy and always laughing”, his friends have said.

Mr Cortes (28), from Rio de Janeiro in Brazil, was cycling on North Wall Quay in Dublin when he was struck by a car at about 10.30pm on Monday night. Mr Cortes was delivering food for Deliveroo at the time of the incident.

He was taken by ambulance to the Mater hospital, where he was later pronounced dead. Gardaí are searching for four occupants of the car, which left the scene.

More than 100 people attended a vigil in Dublin to commemorate Mr Cortes on Wednesday evening.

Deliveroo delivers, motorcyclists and cyclists, many of them Brazilian, gathered at the Spire and on both sides of O’Connell Street to celebrate their friend.

Just before 6pm, representatives from unions and political parties marched up O’Connell Street in solidarity with Mr Cortes’s friends, while buses and cars honked their horns.

Attendees of the vigil held signs that called for justice for Mr Cortes, and said “immigrant lives matter”.

Many held flowers and candles, and offered solace to his fiancee, Theresa Dontas, as she embraced friends in tears. The crowd also partook in a communal prayer.

Deliveroo drivers wrote a letter, which they will distribute to houses while working, highlighting the dangers they face on the roads .

Gabriela Brito, a fellow Deliveroo driver, said Mr Cortes was “always smiling” while at work. “He was so friendly on the streets and would make jokes,” she said. Ms Brito said she hoped motorists realised their actions could pose a great danger to cyclists.

Ana Moreira, a close friend, said she was so sad because “now all of his dreams are gone”.

“He deserved better. It is so stupid that he is gone just because of these people. I hope we find out who did this,” she said. “He knew a lot of people in Ireland, he was always minding others, always kidding ... He was always so happy.”

A Deliveroo spokesman said his death was a “tragedy and a terrible loss”. “Our deepest condolences, thoughts and prayers are with the family and friends of the rider. We will do everything we can to ensure that the family of the rider is supported during this extremely difficult time,” the spokeswoman added.

It is understood Deliveroo is in touch with Mr Cortes’s family and that the company provides insurance that will provide some support to them.

Mr Cortes has lived in Dublin for the past two years and was studying English. It is understood that he was saving money to study a master’s in business at the time of his death.

The car that struck Mr Cortes was recovered in Castleforbes Square a short time later by gardaí. The car was a light grey Ford Focus, which has a large dent on the roof and windscreen.