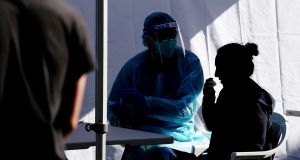 Pregnant women in hospital with coronavirus are less likely to show symptoms and may have a greater risk risk of being admitted to an intensive care unit (ICU) than non-pregnant women of similar age, a study has found.

The analysis, which encompassed 77 studies conducted globally and was published in the British Medical Journal, looked at 11,432 pregnant women admitted to hospital and diagnosed as having suspected or confirmed of the illness, also known as Covid-19.

It showed that pregnant women may be at increased risk of needing admission to an intensive care unit than non-pregnant women of similar age, as is the case with other respiratory viruses such as the flu. This could be partially attributed to the understanding that a mother’s immune system is often compromised to protect the baby, and that the lungs and the cardiovascular system - the coronavirus’s attacking ground - are already under strain during pregnancy.

Compared with non-pregnant women of reproductive age, pregnant and recently pregnant women with Covid-19 were less likely to report symptoms of fever, the report said.

About two-thirds of non-pregnant people admitted to hospital with Covid-19 report symptoms such as fever, cough, and difficulty breathing - but a large proportion of Covid-infected pregnant women may not present with symptoms, said study researcher Shakila Thangaratinam, a professor of maternal and perinatal health at the University of Birmingham.

About four out of every 100 pregnant women with Covid-19 appear to require intensive care, Prof Thangaratinam said. “The overall risk - the actual risk per se is low - but compared to women of reproductive age who are not pregnant, pregnant women appear to be admitted slightly more to ICUs.”

The findings concerning intensive care largely come from a single study from a large US dataset, said Marian Knight, professor of maternal and child population health at the University of Oxford, who served as an adviser to the systematic review group.

The Covid-19 rate is not “anywhere near” the high mortality rate in pregnant women seen in the Sars and Mers outbreaks, Prof Thangaratinam added. Only 73 pregnant women in the analysis with confirmed Covid-19 died from any cause.

However, a quarter of all babies born to mothers with Covid-19 were admitted to a neonatal unit and were at increased risk of admission than those born to mothers without the virus - but there were “negligible risks” of stillbirth and newborn death rates, the researchers said.

In line with the general population, the risks of severe coronavirus rise in pregnant women with increasing age, high body mass index, and pre-existing conditions.

More data is needed in comparing pregnancy outcomes versus women who don’t have Covid-19, Prof Thangaratinam highlighted. “Although 17 per cent of women delivered before 37 weeks - which is considered a preterm birth - only 6 per cent actually went into labour preterm and delivered, which makes us think that could be other factors at play - such as hospital policies.”

How pregnant women and their unborn children are affected by Covid-19 is a persistent, wide-ranging question. Typically, researchers will conduct systematic reviews integrating multiple studies to land on a consensus, but in the case of Covid-19 scientists have been inundated with data that often become obsolete within months of publication. So researchers - including scientists from the World Health Organisation - embarked on a project that regularly updates its findings as fresh data become available.

“Other burning questions also need to be addressed, such as the impact of coronavirus in early pregnancy and on transmission from mother to baby in the womb,” said Dr Edward Mullins, an NIHR academic clinical lecturer at Imperial College, who was not involved in the analysis. – Guardian