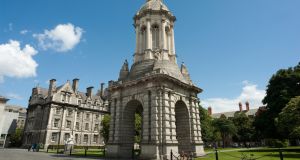 In all, the rankings bring mixed news for the nine Irish universities which feature in the top 1,000.

Three slipped down (UCD, NUI Galway and Maynooth University), two climbed up (Trinity and DCU) and the remainder held onto their positions.

The RCSI University of Medicine and Health Sciences is the second highest ranked Irish institution and held its ranking in the 201-250 category.

University of Limerick, in eighth place, remains in the 501-600 category, while Technological University Dublin stays in the 801-1,000 category.

Globally, the University of Oxford has claimed the top spot for the fifth year in a row, followed by Stanford, Harvard and California Institute of Technology.

The US domination of the top-10, however, masks its wider decline in the overall rankings.

China’s Tsinghua University has become the first ever Asian university to break into the top 20 since the current methodology used in the rankings were launched in 2011.

The UK’s status is also under threat as as institutions from Asia continue to climb up the rankings.

Of the UK’s 20 highest ranked institutions last year, only five improved their position in the table and institutions outside of the top-200 show signs of decline.

Trinity said its result was helped by a strong performance in research, one of the main categories on which the overall score is based.

The college’s dean of research, Prof Linda Doyle, said she was delighted to see the college improve its position.

“Excellence in research lies at the heart of our identity as a university and has a fundamental influence on our teaching,” she said.

“This speaks to the quality of our researchers, who are excelling in difficult times in which funding is harder to come by than ever.”

RCSI said it was happy to maintain is top-250 ranking for the fifth year in a row, despite a a 55 per cent increase universities assessed in this worldwide league table.

It said its performance was boosted by its strength in research with the impact of its publications in translational medicine and health sciences .

DCU said it was pleased to be one of just two Irish universities to climb in the rankings this year.

President of DCU, Prof Daire Keogh, said its improved performance demonstrated the progress it was making in advancing its reputation for world-class research.

“The advance is a recognition of the hard work, excellence, and expertise of our staff and I want to congratulate them all on this significant global affirmation of their work,” he said.