Robert Nairac was not involved in collusion, victims investigator claims 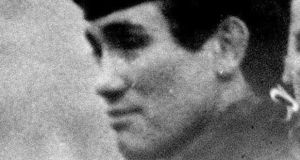 Captain Robert Nairac was not involved in the Dublin-Monaghan bombings or other incidents of loyalist collusion during the Troubles, a senior figure in the organisation charged with finding the “disappeared” has claimed.

Senior investigator Geoff Knupfer said the Independent Commission for the Location of Victims’ Remains had investigated many of the rumours surrounding his alleged involvement with loyalist paramilitaries.

Captain Nairac was a British army intelligence officer who was abducted from a pub in Dromintee, Co Armagh and shot dead by the Provisional IRA on May 15th, 1977.

To this day he is only one of three of the disappeared who remains have not been found out of 16 cases which have been investigated.

“We are coming at this as an independent organisation and not one with an agenda. We have not found a shred of evidence to support any of these allegations in any way shape or form,” the retired former policeman has said.

Mr Knupfer said Captain Nairac is linked with five different terrorist incidents in the mid-1970s: the Dublin/Monaghan bombings of May 1974, the Miami Showband massacre of 1975, the shooting dead of IRA operative John Francis Green in same year, the Kingsmill massacre and the killing of another IRA man Peter Cleary both of which occured in 1976.

Mr Knupfer said he was satisfied that Captain Nairac was not in Ireland for four of those five events and in the case of the shooting of John Francis Green in Castleblayney, Co Monaghan, he was deployed in an operation in Derry on that date, January 10th, 1975.

On May 17th, 1974, the date of the Dublin-Monaghan bombings, he was on a training course in Ashford, Kent. The 45th anniversary of the worst atrocity of the Troubles, in which 34 people were killed, occurs on Friday.

Mr Knupfer believes Captain Nairac’s posthumous reputation as being somebody involved in loyalist paramilitarism has grown over the years and has been hurt by the refusal of the British Ministry of Defence to speak up on his behalf.

“Rather than countering the allegations that were made against Robert Nairac, they have just said they never confirm or deny,” he said.

“Persuading an organisation like the Ministry for Defence to change a policy that has been around for years would be quite hard to do.

“I have raised it with them and suggested where there is nothing contentious in responding to an inquiry, why don’t they just do it? If they had said this 30 years ago, we wouldn’t be where we are today with Robert Nairac.”

Mr Knupfer stressed it was not the role of the commission to look into the veracity of the claims made against individuals who disappeared during the Troubles, but they made an exception in the case of Captain Nairac.

He also stated that the commission was satisfied that rumours suggesting Captain Nairac’s body was put through a meat processor was “entirely without foundation”.

Mr Barry said he believed that prosecutions arising out of legacy killings during the killings should be stopped on both sides as they are being manipulated for political purposes.