Search for missing Trinity professor on Everest called off 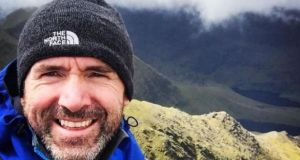 Seamus Lawless (39) was a part of an eight-member climbing expedition when he went missing after he reportedly fell. Photograph: Seamus Lawless/Facebook

The search for a professor at Trinity College Dublin, who was been reported missing while descending Mount Everest after reaching the peak of the world’s highest mountain for the first time, has been called off for the day.

Seamus Lawless (39) was a part of an eight-member climbing expedition led by professional Co Down climber Noel Hanna when he went missing after he reportedly fell from an altitude of 8,300 metres.

The climber, who is from Bray, Co Wicklow, is said to have slipped while in the balcony area near the summit of Everest after reaching the summit early on Thursday.

The rescue team searching for Mr Lawless resumed its efforts on Friday. Nepal is five hours and 45 minutes ahead of Ireland.

Meanwhile, the company that organised the climb said the search has become a recovery operation.

Mingma Sherpa, the owner of Seven Summits Treks which organised the trip, told RTÉ: “It is a very difficult situation. We are searching for a body.”

He said conditions descending the mountain were “very good” but it appears Mr Lawless may have fallen accidentally. “The sherpas were shouting for him last night but couldn’t find him,” he said.

“We are very sad because we have lost one of our best mountaineers. Everybody is very upset in the Himalyas.”

High winds were hampering the search for Mr Lawless and the team leader will have to make a call on Saturday as whether or not to pursue the search for him.

“Winds are at 50 km/h and the wind chill is at minus 41,” said mountaineer Pat Falvey who has climbed Mount Everest twice. “If it is very unlikely he will survive if it is minus 41 degrees in the death zone. We know he was suffering from altitude sickness.”

Sherpas accompanying the expedition said that other climbers had descended to Camp Four below the summit but that the status of the missing Irish climber was still unknown, according to the Himalayan Times.

Mr Lawless flew to Nepal in April to spend a month acclimatising to the thin air at high altitudes.

He had scaled two peaks including Mount Denali in Alaska, the highest peak in North America, last summer in preparation for his ascent of Everest.

A spokeswoman for Trinity College said: “Seamus and his family are in our thoughts during this extremely distressing time.”

“This morning his family, friends and colleagues shared his joy on reaching the peak of Mount Everest,” the spokeswoman added.

“We hope that Seamus is found safely as soon as possible and until then we will be offering any support we can to his family.”

The Co Wicklow man, who is married with a four-year-old daughter, was climbing Everest as part of a charity effort to raise €25,000 for Barretstown, which supports seriously ill children and their families.

The academic was pursuing a lifelong dream to scale the planet’s highest peak by taking time off from his role as an assistant professor in artificial intelligence at Trinity’s School of Computer Science and Statistics.

“I turn 40 in July. My friends are joking that climbing Everest is my mid-life crisis,” Mr Lawless said in an interview published in February before he set off on the 2019 Irish Everest Expedition to Nepal.

The Co Wicklow man spoke of his decades-long fascination with the mountain and a National Geographic map of the climbing route up Everest given to him by his father that stayed on his bedroom wall for years.

Mr Falvey said mountaineering was ultimately a “selfish pursuit and I was one of them. Can I justify it? The answer is no. It’s a very selfish sport.

“Everybody involved knows the risks involved in climbing Everest and that they are putting their lives in danger.”

He said most climbers rationalise the risk by stating that the large majority of climbers come home safely from Mount Everest.

Seven Summit Treks, the guiding company, said it had a team of Sherpas searching for Mr Lawless.

The company reported on Thursday morning that Mr Lawless had reached the peak along with Mr Hanna, another Irish climber Jennifer Shirley and Saray N’ksui Khumalo of South Africa, the first black African woman to reach the summit.

A spokeswoman for the Department of Foreign Affairs said it was aware of media reports about the missing Irish climber and it stood ready to provide consular assistance if requested.

Dee Ahearn, chief executive at Barretstown, said this was “a dreadfully upsetting and uncertain time for Seamus and his family”.

“Our thoughts and indeed the thoughts of the entire Barretstown community are with Seamus, his family and friends,” she said.