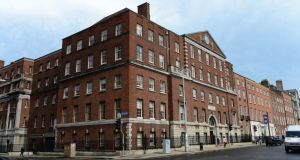 On the basis of results from tests carried out, the couple opted for a termination, which was carried out in Holles Street two months ago. Photograph: Bryan O’Brien/The Irish Times

An independent review is to be conducted into the case of a termination carried out for reasons of fatal foetal abnormality, where a test later showed no abnormality was present.

The National Maternity Hospital in Dublin has commissioned the review into the circumstances of an abortion carried out in the hospital last March.

The review is expected to be carried out by the Royal College of Obstetricians and Gynaecologists in the UK in response to a complaint made by a couple who attended the hospital.

The woman involved was tested for a potential abnormality in chromosome 18, which can give rise to a fatal foetal abnormality known as Edward’s Syndrome, or Trisomy18.

The Chorionic villus sampling (CVS) test, which was processed in the UK, involves taking cells from the placenta, which are split into two samples.

The first sample, which was processed in five days, showed signs of the abnormality. This test is regarded as 99 per cent accurate, with a false positive rate of just 0.15 per cent.

On the basis of this result, the couple opted for a termination, which was carried out in Holles Street two months ago.

However, the second sample, which took two weeks to process and involved the growing out of cells, came back normal.

The hospital and the UK testing facility accept this latter test result as being correct but stand over the accuracy of the work performed.

In general in Ireland and the UK, decisions on terminations are made on the basis of the first test result and in many countries the second part is not performed.

CVS, the prenatal test used to diagnose chromosomal abnormalities, involves the taking of cells from tiny projections on the placenta, the chorionic villi, and sending them to a lab for genetic analysis.

The Royal College of Obstetricians and Gynaecologists (RCOG) said in a statement: “We can confirm the RCOG has not yet received a formal approach to undertake this review. Should an approach be forthcoming, this will be considered in the usual way.”