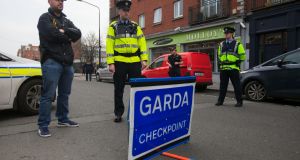 Members of the Gardai at a checkpoint in Dublin. File photograph: Collins

Two young men have been arrested as part of an inquiry into aggravated burglaries and robberies in the Drogheda area.

The 22-year-old and the 18-year-old were arrested in the Drogheda area on Thursday and are being detained under Section 4 of the Criminal Justice Act, 1984 at Drogheda Garda Station.

The 22-year-old was due before Drogheda District court on Friday while the second man remained in Garda custody.