Tributes are paid on Armistice centenary to 4,500 Cork men and women who died 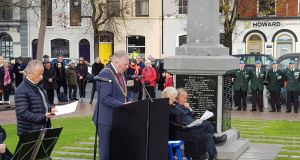 Lord Mayor Mick Finn suggested people should try and imagine what life was like for the generation of young Cork people who went to fight in battle.

Commemorating those who fell in the first World War will help Ireland and the world learn lessons on how to avoid such carnage and the futility of another global conflict, Lord Mayor of Corksaid on Sunday.

Cllr Mick Finn led tributes to the 4,500 Cork men and women who died in World War I both on land across several continents and at sea and in the air. Some 400 people gathered at the Cenotaph on the South Mall for an Armistice Commemoration organised by Cork City Council.

Mr Finn recalled the words of martyred Sinn Fein Lord Mayor of Cork Terence MacSwiney who wrote that “death sobers us all” and “we have surrounded with fictitious glory, the carnage of battlefields” when the reality was that “war is hell”.

He said people should be careful “to frame our memory and interpretation of that war on the times that were in it and now from the comfortable remote of a century’s drift …. It is only how we honour those who went before us and draw from their time a lesson that we can begin to dream about our futures”.

He suggested that people should cast their minds back and try and imagine what life was like for the generation of young Cork men who went to fight in battles such as Gallipoli, Salonika, Ypres and the Somme as their city and county struggled to recover from enforced famine and unemployment.

Today’s generation will never know the full range of motivations that prompted 200,000 Irish men to fight alongside Ireland’s greatest foe but people should be mature enough to reflect with consideration on why that was, said Mr Finn .

“We need to remember those ordinary men and women who left the green hills of Cork for the green fields of France, many never to return, others suffering the experience for the rest of their lives … continuing to tell their stories is our best salute to them and to our past.”

David Daly of the Royal British Legion thanked Cork City Council for organising the commemoration before Denis Kirby of the Western Front Association read from a letter by veteran, John O’Flynn written in December 1918 in which he recalled how they had gone to war “in the name of Ireland”.

Multi-faith prayers were recited by the Catholic Bishop of Cork and Ross, Dr John Buckley, Rev Geraldine Gracie of the Methodist Church and by David Coon on behalf of Cork’s Jewish Community before wreaths were laid by Lord Mayor Finn and others at the Cenotaph.

A colour party from the First Cavalry Squadron at Collins Barracks under the command of Lt Paul Fleming provided a guard of honour and after Last Post and Reveille, the national anthem, Amhran na bhFiann was sung by Cork soprano, Cara O’Sullivan to bring proceedings to a close.

Elsewhere Church of Ireland Bishop of Cork Paul Colton has asked whether it is not time that all the approximate 4,200 people from the city and county who died in World War I were remembered.

Some were “remembered nowhere in Cork,” he said. “Is it not time that we should have one memorial where the humanity of Cork, city and county, regardless of religious affiliation, or none, are memorialised together?,” he asked.

He was delivering the oration at the city’s War Memorial on Grand Parade .

“This is the centenary of the end of the First World War, and so, in some limited way, it was an end. The guns did fall silent on the Western Front. But the suffering and dying did not end,” he said. He named Cork people who “would all die this month one hundred years ago, after the armistice. In so many ways, in countless homes, the war went on and did not end.”

He recalled how “at a human level people lived with the grief and the wounds. In my pocket I carry what, to my grandmother were treasured keepsakes, sacred relics, as it were - some of many - of the man she loved and married in 1916 and who eleven months later was killed in action: two lace handkerchiefs from Belgium.

“Channeling that grief into her care for the wounded she met my grandfather, returned to inner city Dublin carrying wounds from British East Africa.”

There was, he said, “no glory in war. We do not celebrate. We commemorate. We remember. We are here because, fact of facts, people, human beings, in all the diversity of their personality, backgrounds and humanity, fought and died. It was tragic. It was devastating. Such was the ghastly horror of it all that those who came home were silent. We too should be lost for words.”

He continued:“Whatever our current outlook we can all agree that people died; that there was unimaginable and ghastly suffering; and that the world has never been the same since. Our world still shudders.

“Today is not a day for analysis and debate; it is a day for gazing into space in dumb-founded silence and, in our faltering way, from the vantage point of our own human vulnerability, to try to take it in,” he said.