Exiting EU a matter for UK government and parliament and EU, Taoiseach says 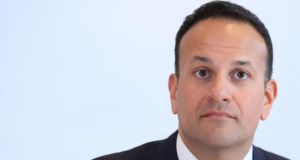 Taoiseach Leo Varadkar: “There isn’t, nor should there be, any one political party anywhere in the UK or Europe that should have a veto on this.” Photograph: Peter Byrne/PA

The Taoiseach has said that no one political party could exercise a veto over a Brexit agreement between the European Union and the United Kingdom.

Speaking in Paris where he attended Armistice commemorations, Leo Varadkar spoke of a contemporary challenge facing Europe and listed “the fact that for the first time a member state of the European Union is leaving” as one of the greatest threats to the continent and to Ireland.

Asked if there was a danger that Arlene Foster’s Democratic Unionist Party would sabotage an agreement on an orderly Brexit, Mr Varadkar said, “There isn’t, nor should there be, any one political party anywhere in the UK or Europe that should have a veto on this.”

The DUP “have influence”, Mr Varadkar acknowledged. But, he added, “Ultimately this will be a decision for the UK government and after that Westminster and the European Council.”

He cast doubt on how representative the DUP is of wider opinion in Northern Ireland.

“There are other political parties too,” he said. “I’m going to meet some of them next week. I think we should listen to the voices of business, of farmers, of trade unions, of citizens and NGOs.When you listen to Northern Ireland in the round, they see some sense and perhaps even some benefits for Northern Ireland” in a backstop that would keep the North in the single market.

“It’s always important to go back to first principles and to bear in mind that the position of Ireland, and the Irish Government, has been that we don’t want any new borders,” he said.

“We don’t want to put up any borders that divide us, North and South, east and west or across the European Union. It is Brexit, it is the decision of the UK to leave the EU, which we regret but respect, that has raised all these challenges.”

Presidents Emmanuel Macron and Donald Trump made European defence an issue this week, when Mr Macron called for the creation of a European army that could stand up to China, Russia and the US.

The Taoiseach rejected the idea that participation in Pesco would raise Ireland’s defence budget to 2 per cent of gross domestic product.

“That really is far off the mark,” he said. “We will be increasing our spending because we want to bring our defence forces up to full strength. We’ve a deal in place to increase pay for defence forces. We are also buying new equipment and I think that’s spending I can stand over.”