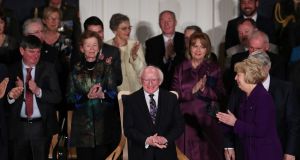 Michael D Higgins gets a standing ovation at his inauguration at Dublin Castle. Photograph: Maxwells/PA Wire 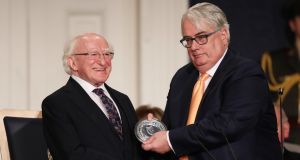 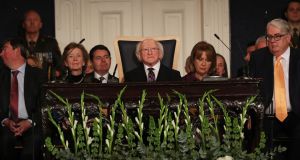 Michael D Higgins is seen during the service of prayer at the beginning of the presidential inauguration ceremony. Photograph: Government pool/Maxwells

At his inauguration for a second term on Sunday evening, President Michael D Higgins said “ideas matter” and “history tells us that anti-intellectualism” is “the weapon of authoritarian and anti-democratic forces in so many parts of our shared, vulnerable planet”.

“Our choice must be to actively extend and deepen democracy, to express it in wider forms and in new ways,” he said.

He said that not alone was “the very existence of our planet in its biodiversity threatened, but we have not yet slowed the pace of that destruction.

“We live with ongoing violence against women which must be ended.

“We must confront and challenge any excuses offered for the denial of the irreducible rights of women, who make up, let us not forget, a majority of humanity on this planet. It is important that we recognise the rights and culture of indigenous peoples. It is also important that each person is free to express their sexuality, gender or relationship.”

He was presented with his seal of office by Chief Justice Frank Clarke after taking the declaration of office at Dublin Castle.

At the ceremony, Taoiseach Leo Varadkar spoke of Mr Higgins’s overwhelming mandate and said we are fortunate to have somebody with the “values” and “sensitivity” of Mr Higgins, who “speaks for all parts of society”. He acknowledged the contribution of the President’s wife Sabina. Mr Varadkar also made reference to Mr Higgins’s dogs Brod and Sioda.

Garda Commissioner Drew Harris and dignitaries from more than 25 countries were also in attendance.

The event started with an inter-faith service of prayer from Christian, Jewish and Islamic representatives, including Archbishop of Dublin Diarmuid Martin. This was followed by a reflection on behalf of the Humanist Association of Ireland.

In 2011, Mr Higgins had become the first President of Ireland to include humanists in the official inauguration ceremony. The association has described the gesture of inclusion towards those of no religion as “very significant”.

Among the musicians who performed at the event was Celine Byrne, who sang a song written by Seán Ó Riada, the father of Sinn Féin presidential candidate Liadh Ní Riada.

Traditional Irish music was provided by Caoimhín Ó Raghallaigh and the combined bands of the Defence Forces School of Music.

The event was delayed by six hours so that Government Ministers could attend events in France commemorating the centenary of the first World War ending.

The President’s guests at the inauguration ceremony were described as “children and adults from all walks of life”.

As Mr Higgins left the hall for Dublin Castle’s Upper Yard he was greeted by about 70 children from schools across Ireland. He also inspected a guard of honour. The couple then held a reception in the State Apartments in Dublin Castle for a number of invited guests.

Mr Higgins’s seven-year term had ended on Saturday, and he ceased to be head of State from midnight on November 10th. The Presidential Commission – made up of the Chief Justice of the Supreme Court, the Ceann Comhairle of the Dáil and the Cathaoirleach of the Seanad – stood in during the interregnum period.

Mr Higgins wore a suit by Dublin-based tailor Declan Abrahams for the ceremony, while Sabina Higgins wore a dress and coat by Tipperary-born designer Louise Kennedy. She also wore a Kennedy coat and dress for the 2011 inauguration. At the State Apartments reception she was to wear a pink dress designed by Irish designer Heidi Higgins, a graduate of NCAD.

It was originally planned that Mr Higgins would be inaugurated for his second term at midday on November 11th, but he asked that the ceremony be moved to facilitate those who wished to attend Armistice Day commemorations that morning.

Mr Higgins won the presidential election against five other candidates on October 26th with 56 per cent of first preference votes. Additional reporting: PA