President Elect Michael D Higgins leads the State commemoration at Glasnevin Cemetery in Dublin to mark the centenary of the ending in 1918 of the first World War. Video: Áras an Uachtaráin, Irish Defence Forces 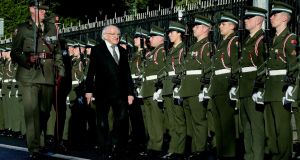 Michael D Higgins at a ceremony marking the centenary of Armistice Day at Glasnevin Cemetery in Dublin. Photograph: Maxwell’s

President Michael D Higgins has warned against a new international arms race and the fuelling of wars in the Middle East and Africa, as he led the State’s commemoration marking the centenary of the ending of the first World War.

He paid tribute at the ceremony at Glasnevin Cemetery in Dublin to the 200,000 Irish men who fought in the “great conflagration” and referred to the reticence in Ireland to recognise the human reality of the conflict.

Mr Higgins said this was reflected in an “official amnesia that left a blank space in our public memory”.

Relatives of soldiers who fought in the war joined members of the diplomatic corps from 47 countries, military veterans, and other dignitaries, including the chief of staff of the Defence Forces Vice-Admiral Mark Mellett, Garda Commissioner Drew Harris and former president Mary Robinson, at the ceremony.

Mr Higgins laid a wreath in honour of the war dead as members of the Defence Forces bowed their heads. Wreaths were also laid by diplomats and representatives of military veterans and various organisations.

Earlier, Minister for Culture and Heritage Josepha Madigan led a ceremony at the cemetery in which Victoria Cross commemorative plaques were unveiled, to honour posthumously five Irish soldiers who fought in the war. The Victoria Cross is the most prestigious British military honour, awarded for gallantry “in the presence of the enemy”.

Mr Higgins said those at the ceremony assembled to remember the 14 million who died in a conflict that lasted 1,564 days and represented the collision of empires, and was one of two wars that “disfigured a century”.

A sole piper played a lament and there was a rendition of the Last Post before a minute’s silence was observed to mark 11am on November 11th, 1918, when the Armistice was formally declared and the war ended.

In his address, Mr Higgins said: “Ours is not a celebration of militarism, nor a valorisation of martial spirit, but a simple recognition of our common humanity, as we recall the destruction of the promise and potential of a generation in the first World War.”

“We must remember how easily the powers of Europe, with all their centuries of scholarship, philosophy and learning, cast it all aside and fell into enduring and terrible enmity.”

There was an uncertainty, even a reticence, to recognise the human reality of the first World War

He remembered in particular the tens of thousands of Irishmen who never returned home from the war, and “who remain forever in the soil of Belgium, France, Greece and Turkey”.

Some who returned “threw themselves into our own battle for national independence, while others would experience a lack of understanding of either their service or their wounds and would struggle to find their place in a rapidly changing Ireland”.

He said that, afterwards, for many years, “there was an uncertainty, even a reticence, to recognise the human reality of the first World War, and those who fought and died in it. In our public history, the reticence was reflected by a form of official amnesia that left a blank space in our public memory.”

But with the “excavation of the past, we have a far greater understanding of the motivation of those who enlisted in the war effort, and a better appreciation of the experience of the war, not only for those in uniform, but for civilians”, he said.

In St Patrick’s Cathedral in Dublin, evensong took place under a canopy of “leaves” – each one representing one of the Irish men who died in the first World War. The leaves are composed of messages left under the Tree of Remembrance, a sculpture resembling a blasted tree from no man’s land on which the public were invited to write a message for a loved one who had died.

Each of these leaves represented a “torrent of tears from the heavens”, the dean of St Patrick’s Cathedral in Armagh Rev Gregory Dunstan told the congregation, which included Minister for Finance Paschal Donohoe, Fianna Fáil leader Micheál Martin and the ambassadors of Britain and Germany.

Later, many in the congregation went to Grangegorman military cemetery for a sundown service to mark the centenary of Armistice Day. Tea lights were placed on each of the 623 graves of those killed in the war who are in buried in the cemetery.

Relatives of company sergeant Martin Doyle placed a light on his grave. He won the Victoria Cross in September 1918, but later joined the IRA. A paving stone was earlier in the day unveiled in his honour in Glasnevin Cemetery along with those of four other Irish VC recipients.

Meanwhile, hundreds of people attended a service of remembrance at the Irish National War Memorial Gardens in Islandbridge.

The event, organised by the Royal British Legion and the trustees of the memorial gardens, featured many of the regimental associations based in Ireland and was billed as the “peoples’ commemoration”.

A formal Act of Remembrance with two-minute silence took place at the Cross of Sacrifice at 11am. Wreaths were laid on the monument by relatives of those who died in the war.