At least 500,000 in ‘serious distress’ over housing, says McVerry 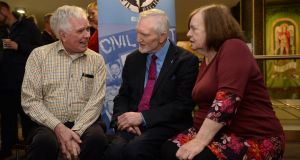 At least 500,000 people in the Republic are in housing situations that are causing them “serious distress”, homelessness campaigner Fr Peter McVerry has said.

Speaking at a seminar to mark the 50th anniversary of the civil rights movement, the Dublin-based campaigner said the Government was facing a “catastrophe”, with the housing crisis set to deepen.

He called for a major Government programme of social housing construction not seen in decades to alleviate the crisis.

“We could have a catastrophe coming down the road unless Government policy changes,” he told a seminar entitled We Shall Overcome hosted by a group of trade unions at Liberty Hall in Dublin. The event was held to mark the 50th anniversary of the civil rights movement this year.

Speakers at the seminar noted that socio-economic and political issues that triggered that civil rights movement in Northern Ireland still remained a problem in the Republic 50 years later later.

“We live in a time when the issues of 50 years ago – homes for all, decent employment, fairness and equality – have not gone away. Core values are under threat,” said Ethel Buckley, deputy general secretary of Siptu, one of the organisers of the event, along with other unions Ictu, Into and Fórsa.

Ms Buckley condemned ethnic discrimination, which had again polluted political discourse – with presidential candidate Peter Casey having recently criticised Travellers and how they should not be recognised as an ethnic minority.

“People found a man willing to play the lowest common denominator in Irish politics,” she said.

Dr Sinead Pembroke, a senior researcher and policy analyst at Tasc, a think-tank for action on social change, highlighted the impact of precarious work and zero-hour contracts. She read out comments from interviews conducted with people affected who could not afford a mortgage or rent, or to start a family.

The housing crisis was a recurring theme of the seminar. Fr McVerry told a large audience gathered in the basement meeting room of Liberty Hall that the Government’s response to homelessness and social housing was to provide three out of every four houses in the private rented sector but that this sector was “part of the problem, not part of the solution”.

“Most people becoming homeless are out because they were evicted from the private rented sector.”

He said the number of people caught up in the housing crisis far exceeded the Government’s official figure of 10,000 caught up in homelessness. That did not include people living in tents or cars, or sleeping rough, or the numbers living in overcrowded accommodation or with four generations of one family in one home.

He warned of the housing crisis deepening to severe levels if Government policy was not changed to help more than 30,000 people who were in long-term arrears on mortgages they would never be able to repay, whose loans would be sold to so-called vulture funds, and who faced potential repossession.

To solve the crisis Fr McVerry urged the Government to make the right to housing constitutional, to ban evictions from rental properties unless in serious circumstances, to encourage people to stop opposing social housing projects and to use compulsory purchase orders to turn vacant properties into social housing. “It is obscene to have an empty building with nobody living in it,” he said.

Bernadette McAliskey, the former MP and veteran civil rights activist, spoke about moving from campaigning for the rights of Catholics in the late 1960s to being a campaigner for rights for all people.

“You learn in the course of struggle that every right you demand for yourself is a right you must afford to every other human being or you inevitably, down the end of the road, become part of a very significant problem,” said Ms McAliskey, who, when aged 21, became the youngest woman ever elected to Westminster.