‘Has the council nothing better to being doing?’ says pub owner 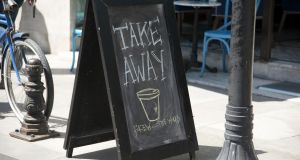 Dublin City councillors are to vote on a proposed ban on sandwich boards from outside shops in the city centre. Photograph: iStock

Dublin City councillors are to vote on a proposed ban on sandwich boards from outside shops in the city centre .

Green Party councillor Ciaran Cuffe has tabled a motion asking the city manger to implement a “zero tolerance approach to the proliferation of billboards (A-frame signage) on the streets”.

The motion goes before the council’s central area committee on Tuesday afternoon and could be regarded as a prudent health and safety measure or the nanny state gone mad depending on your point of view.

Cllr Cuffe maintains the sandwich boards are an obstacle to people with mobility impairments and a danger to the public. He suggested the council start leafleting premises in the city centre area starting with Parnell Street and Capel Street telling them to take the sandwich boards inside.

Business owners in Capel Street were incredulous at the proposal which they see as another attempt by the council to hinder their business.

“Has the council nothing better to being doing?” asked Stuart Scott, the manager of the well-known Capel Street landmark, McNeill’s pub.

The billboard outside his pub advertises live music and toasted sandwiches. Far from being an impediment, he says the sandwich board enhances safety as it is placed over the hatch to the beer cellar which becomes slippery when wet.

“A friend of mine’s sister is blind. She has a dog and a cane,” he says. “She thinks the A Frames aren’t the problem. It’s idiots walking down the street with headphones on looking at their mobile phones.

“What are the council trying to do with the city? Whatever they are trying to do, they are not making it better.

“If I have to remove the sign, things will go down hill and we’ll close. Basically the council don’t want you to own a business in Dublin.”

Isa Aslan, who owns the Turkish barber shop across the road, said he is happy to remove the sign if the council rebates him the €6,500 he pay in rates every year.

“What do I get for my money? If I have to remove the sign, I will go bankrupt,” he says. “All my customers see it. I make money from it,” he said. “I was asked to move it last week. I told them that I will remove it when they stop getting rates from me.”

Michael Burns, the owner of the Goodwill Vintage and Thrift Shop, is sanguine about the prospects of losing his sandwich board. He points to the sign which is hanging above the entrance to the shop as a more adventageous sighting.

“I can certainly see somebody who is visually impaired having a difficulties with these. If I have to move it I will move it.”

If Cllr Cuffe’s motions succeeds, we are unlikely to hear the last of the matter.