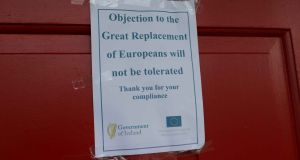 A sense of unease could be detected among locals in Lisdoonvarna this week ahead of the arrival on Monday of the first group of asylum seekers to be accommodated at a new direct provision centre in the north Co Clare town.

Many people were reluctant to comment amid acrimony over how local opposition to the scale of the plan is being reported. There are also concerns over the arrival of members of a Dublin-based far-right group in the town in recent days with the aim of fomenting anti-immigrant sentiment.

“Three week ago if a tourist googled Lisdoonvarna, it was a wonderful place to go,” local businessman Kieran O’Halloran said. “Google it now and it is not positive because it is all bad stories about the direct provision centre that is being forced on us. We have had a bad run in the media.”

As preparations by a number of locals to welcome the first group of families continued on Friday, a leaflet was found taped to the red door of the King Thomond Hotel where the asylum seekers will be accommodated.

Complete with a Government of Ireland gold harp and a blue EU flag at the bottom, the leaflet stated: “Objection to the Great Replacement of Europeans will not be tolerated – Thank you for your compliance.”

Mr O’Halloran described the placing of the sign on the door under the cover of darkness as “sinister”.

Another anonymous leaflet distributed in the town documented various rapes and murders committed by foreign nationals in Ireland over the past number of years.

The “Diversity Crimes in Ireland” pamphlet read: “This open borders experiment has consequences. We should have strict vetting and a fast-track deportation system for those who commit crimes in our country . . . This list represents a small sample of a much larger problem.”

Looking at the leaflet, Mr O’Halloran said: “That is not us in Lisdoonvarna. It is disgusting. We don’t want that, but we seem to be getting it whether we like it or not.”

The Dublin-based agitators were trying to “hijack” local opposition to the new direct provision centre, which will have the capacity to accommodate 115 people.

“They [the campaigners] were telling me that they can help us out and do this and do that; their agenda is completely different,” Mr O’Halloran continued.

He said he came across members of the far-right group on Thursday night and asked them to stop asking customers in a Lisdoonvarna pub: “Are you local? Are you local?”

The arrival of the Dublin-based group coincided with the publication this week of a story on Breitbart, the US alt-right news platform, about a secret ballot vote in Lisdoonvarna in which 93 per cent of respondents said “no” to the direct provision centre.

The Breitbart story was based on an interview with Lisdoonvarna local Michael Walsh, who was one of the founding editors of the alt-right platform. The author and screenwriter moved from the US to the Co Clare town a number of years ago and today lives in a renovated ancestral home there.

In the interview, Walsh lamented Ireland being “a slave state” of Brussels.

On the imminent arrival of the asylum seekers, Walsh said: “They won’t tell us what country they’re coming from. What religion they’re from.”

Others in the town, however, have been preparing a warm welcome for the new arrivals. Local woman Theresa O’Donoghue set up the Caring for Asylum Seekers in Lisdoonvarna Facebook group earlier this week, and by Friday its members totalled 148.

She said people were getting ready to welcome the first families on Monday and had already gathered “loads of toys” to give to the children, while there were also plans for a small welcoming group to meet with the asylum seekers.

“It is very positive. People have offered to teach the asylum seekers English, art, yoga, while the local library has also come on board,” she said.

The controversial secret ballot vote last week followed a public meeting at which hotelier Marcus White said he wouldn’t proceed with the direct provision centre if the people didn’t want it. Five days after the poll, Mr White – who owns four hotels in Lisdoonvarna – signed a one-year contract with the Reception and Integration Agency (RIA), paving the way for the opening of the centre.

Based on RIA payouts last year, Mr White’s hotel firm stands to generate €1.7 million in revenues over the course of the contract, though profits will be much smaller after the costs of accommodating the asylum seekers are taken out.

In a statement this week, Mr White confirmed that he gave a commitment “that if all of the people of Lisdoonvarna did not want the contract to go ahead then it would not”.

He said: “There have been various meetings and while there is certainly a number of people that do not want the contract to be signed, there are equally a number that do.”

Chairman of local tourism body Lisdoonvarna Fáilte Paddy Dunne said the community was “disappointed that Marcus White chose to not honour his pledge to the town to respect their wishes”.

Mr Dunne said the 30 people due to arrive on Monday would receive a warm welcome from locals, but asked that the RIA cap the number at 30. “The numbers are too high for such a small village.”

Minister of State for Equality, Immigration and Integration David Stanton rejected the request for such a cap, but has given an undertaking that none of the asylum seekers to be based in Lisdoonvarna would be single men.

Co Clare’s Oireachtas members met with Mr Stanton this week to communicate local concerns over a perceived lack of consultation on the issue and the ability of local services to cope with the new arrivals.

Mr O’Halloran, who was one of those to vote “no” in the secret ballot, said locals were feeling bruised over how the RIA had dealt with the issue.

“What kind of a country do we live in when a people who say, ‘We don’t want something’, get absolutely steam-rolled? It is a bitter pill to swallow,” he said.

He added: “There is a huge fear of the unknown here. The people coming here don’t have a choice – ‘You are going to Lisdoonvarna.’”