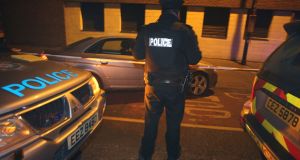 Figures from the PSNI’s statistics branch show that in 2013 there were 64 attacks from republican dissidents as well as ongoing loyalist paramilitary violence directed at their own communities. In 2017, the figure rose to 101 shootings and beatings. File photograph: PA

There has been a 60 per cent increase in such attacks over the past four years, according to the latest police figures obtained by the Guardian.

The PSNI chief constable, George Hamilton, said some close relatives of those who are about to be attacked are plying their children with alcohol or giving them powerful painkillers before “appointments” with the “punishment” gangs.

From 2013 to the end of last year, the number of shootings and assaults by republican and loyalist paramilitaries has increased dramatically.

Figures from the PSNI’s statistics branch show that in 2013 there were 64 such attacks. In 2017, the figure rose to 101 shootings and beatings.

The statistics also show that republicans appear more likely to use guns to shoot those inside their respective communities that they label as criminals or “antisocial elements”.

According to PSNI figures seen by the Guardian, of the 27 victims shot in this latest wave of paramilitary “punishment” attacks, dissident republican groups such as the New IRA or Continuity IRA have been responsible for shooting 24 of them.

Many of the victims are often beaten after being accused of criminal actions from drug dealing to car theft, without any form of legal representation or appeal.

In 2013, four physical beatings were carried out by republican dissidents but within the past four years this has increased to 17.

Loyalist paramilitaries, meanwhile, appear more inclined to carry out beatings than shootings against those who cross them.

In 2013, the figures show that 34 assaults were carried out by those aligned to certain factions of the Ulster Volunteer Force and the Ulster Defence Association. Within four years, this number had increased to 57.

Responding to the upsurge in paramilitary “punishment attacks”, the chief constable said some parents were “acquiescing” by bringing their children to appointments for beatings and shootings.

Mr Hamilton said: “You have a culture of lawlessness and fear in some of these communities where the victims know who is shooting them; the parent knows who is shooting their child. Sometimes parents are negotiating with these thugs to take the kid to certain places by arrangement.

“It is not unknown to my officers that in certain circumstances that parents have dosed their kids up with powerful painkillers and alcohol to remove the impact of the punishment shooting or beating. By colluding in this they [the parents] are hoping to negotiate less severe beatings or shootings. There is something madly wrong with society whenever parents even countenance doing that with their own children.”

Mr Hamilton said he did not blame the parents but saw it as an indication of the climate of fear paramilitary organisations were imposing on the areas they operated in.

He said those behind such attacks were “quasi-terrorists who were and are very good at covering their forensic tracks”.

In the absence of forensic evidence, the PSNI chief constable said, even victims were reluctant to identify those behind attacks.

Liam Kennedy, a Queen’s University of Belfast lecturer and long-term campaigner against paramilitary “punishment” attacks, said that given the young ages of many of those targeted, the practice was “tantamount to child abuse”.

Mr Kennedy is the author of a major study into the long-term practice of alternative paramilitary policing in Northern Ireland entitled They Shoot Children Don’t They?

“The trend is still alarmingly upwards. The last month has been a particularly vicious month. The victims are mainly young men from working-class areas, and not even children are immune,” he said.

“Last year, three children were singled out for mutilation through gunshot wounds to the legs. This is child abuse of a kind comparable to the actions of paedophiles.”

He called on international human rights organisations to speak out more against the practices, which he said were “week-by-week serious human rights violations”. – Guardian