Payouts to abuse victims in Northern Ireland ‘would be unconstitutional’ 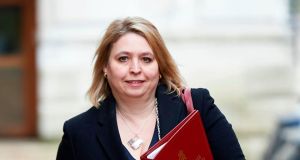 Karen Bradley has faced criticism for not taking action to release money for victims amid the powersharing impasse at Stormont.Photograph: NIKLAS HALLE’N/AFP/Getty Images

The government would be acting unconstitutionally if it stepped in to pay compensation to abuse victims in Northern Ireland, Karen Bradley has insisted.

The Secretary of State for Northern Ireland said an intervention on the emotive issue would undermine the terms of the Good Friday Agreement.

Mrs Bradley has faced criticism for not taking action to release money for victims amid the powersharing impasse at Stormont.

It is more than a year since a public inquiry recommended providing compensation, a memorial and a public apology to abuse survivors.

The Historical Institutional Abuse (HIA) inquiry, chaired by retired High Court judge Sir Anthony Hart, was set up to examine allegations of child abuse in children’s homes and other institutions in Northern Ireland between 1922 and 1995.

The collapse of devolution last year has led to a delay in implementing Sir Anthony’s findings. A number of victims have died during the 14-month impasse.

Mrs Bradley said she had “heartfelt sympathy” for those impacted by historical abuse.

“But we also have to be mindful that in doing that, and in doing what I fully understand what those victims want to see done, we don’t also undermine the very basis of devolved government that we have in Northern Ireland.

“This is a real difficulty for us.

“It’s an incredibly emotional issue which I want to do my best for those victims.

“It’s something no one should have to go through.”

Mrs Bradley said she did not have the power to intervene.

“Given the powers that I have, the very limited powers I have as Secretary of State for Northern Ireland, for me to go beyond those powers for one specific issue, you have to be incredibly careful and mindful of the constitutional arrangements.” – PA