Solution for undocumented Irish in US unlikely this week

Varadkar intends to raise immigration with Trump during meeting, if time allows 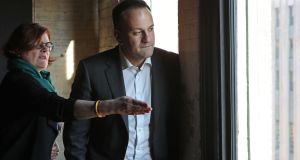 Taoiseach Leo Varadkar is given a tour of the Dallas County Administration Building in Dealey Plaza, downtown Dallas on Monday, a floor above primary crime scene for the 1963 JFK shooting. Photograph: PA

A legal solution for the thousands of undocumented Irish people living in the United States is unlikely to be reached this week, according to officials, as the Taoiseach prepares to raise the issue of immigration with president Trump later this week.

Leo Varadkar said he intends to raise the issue of immigration with the US president during his meeting on Thursday, if time allows.

“As with any meeting between two heads of government, there are always more things on the agenda than you can ever get to, but certainly the undocumented is one of those.”

Efforts have been underway by the government and officials in Washington in recent months to include provisions for Irish immigrants in forthcoming immigration legislation.

But the recent focus on gun control in US congress has pushed the immigration debate to the margins, with no prospect of an immigration package in the coming weeks.

Ireland’s envoy to the United States, John Deasy, has been liaising with Republican figures in the Trump administration and on Capitol Hill in recent months on the issue. Mr Deasy is due to attend the St Patrick’s Day celebrations in the White House later this week.

Asked about the possibility of a deal, Mr Varadkar said: “I know from what members of the administration have said that they would like to find a solution that would allow thousands of Irish people to be regularised but obviously then that has impacts on people from other countries too.”

While the Taoiseach will attend a series of St Patrick’s Day events on Capitol Hill and at the White House on Thursday, Sinn Féin leader Mary Lou McDonald and DUP leader Arlene Foster have not been invited to attend the annual reception in the White House.

Mr Varadkar said on Monday it was a matter for the White House to decide who to invite, but noted the absence of a power-sharing executive in the North changed the context this year.

Gerry Adams is expected to attend a forum marking the twentieth anniversary of the Good Friday Agreement tonight in the Library of Congress, which will also be attended by the Taoiseach.