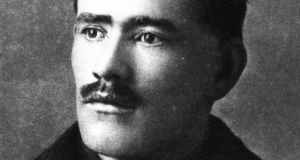 Poet and soldier Francis Ledwidge (1891-1917). He served as a lance-corporal on the Flanders front with the Royal Enniskillen Fusiliers. File photograph: Hulton Archive/Getty Images

A handwritten version of Francis Ledwidge’s most famous poem, A Lament for Thomas MacDonagh, is going on sale at auction in London later this month.

Ledwidge’s poem, written in the aftermath of the Easter Rising, was learned by generations of schoolchildren in Ireland.

In it he laments the death of MacDonagh, a friend who was executed for his part in the Easter Rising.

The version of the poem being sold at Bonhams in London on March 21st was given by Ledwidge to a cook at Ebrington Barracks in Derry, where Ledwidge was based in late 1916. It is signed by him.

The auctioneer says Ledwidge was having a romance with the cook, which might explain the Valentine-style embellishments around it.

Significantly, it also includes a drawing of some blood-soaked hills, with the words “Chocolate Hill” written underneath with a paint brush by the unnamed woman to whom he gave the poem.

Chocolate Hill in Gallipoli is significant, because Ledwidge had been there in August 1915 when his battalion, the 5th Royal Iniskilling Fusiliers (RIF), stormed the Turkish strongpoint.

In its auction catalogue, Bonhams suggests this early version of the poem might actually be about the Irish who died in Gallipoli rather than Thomas MacDonagh – and hence the illustrations for Chocolate Hill.

“This makes sense of several features of both poem and manuscript. The earlier reading fits in with the image of a soldier being buried on a windswept hillside in the Dardanelles,” Bonhams suggests.

“It also provides a cogent contrast with the image at the end of the poem, that of a cow (a Gaelic symbol of Ireland herself) in deep pastures; the soldier being buried on a hillside far from the lush pastures of home.”

The discovery of this manuscript means there are now three handwritten versions of the poem. One, which was given by Ledwidge’s patron Lord Dunsany to Thomas MacDonagh’s son Donagh MacDonagh, is regarded as the definitive version. It is now in the National Library of Ireland. An earlier version of the poem written on tissue paper is in the Royal Irish Academy (RIA).

Poet Liam O’Meara, a founder member of the Inchicore Ledwidge Society, said the handwriting is certainly that of Ledwidge. He said Bonhams had made a “compelling argument” that Ledwidge might well have had Gallipoli in mind rather than MacDonagh when he started the poem, but adapted it later.

“Writers and poets often adapt their own work. Elton John’s Candle in the Wind, for example, was written for Marilyn Monroe and adapted for Princess Diana, ” he said.

“Strangely, as you know, this poem is often used as a lament for Ledwidge anyway. It is even inscribed in the wall of the cottage where he was born.”