‘This is the land of the free, home of the brave, where the gay rights movement began’ 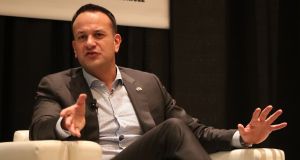 Taoiseach Leo Varadkar at the SXSW festival in Austin, Texas, at the beginning of his week-long visit to the United States of America. Photograph: Niall Carson/PA Wire

Taoiseach Leo Varadkar has said he intends to raise the issue of gay rights when he meets US vice-president Mike Pence later this week.

Speaking during a forum at the the South by Southwest (SXSW) festival in Austin, Texas, Mr Varadkar said that he intends to stress to the vice-president that America has long been a beacon of freedom for people around the world, including people from the gay, lesbian and transgender community.

“We’ve always seen America as a beacon of freedom. This is the land of the free, the home of the brave, this is where the gay rights movement began,” he told a packed hall.

“It’s really tough to see a country built on freedom, build on individual freedom, not being a world leader in that space anymore. I think the majority of American people would agree with what I have to say, even if the administration doesn’t.”

Mr Varadkar also said that he intends to visit the site of the Stonewall protests in Greenwich in New York later in the week, a key moment in the gay rights movement in the 1960s.

Mr Pence, a former governor of Indiana, is one of the most socially conservative members of President Trump’s cabinet. He previously said that gay identity was a “choice” and has opposed gay marriage.

Mr Varadkar is due to dine with Mr Pence at his home in the Naval Observatory in Washington on Friday morning. Mr Pence is well known for his attachment to his Irish identity and pride in his Irish roots which he traces to Co Sligo.

Mr Varadkar was also probed during the scheduled debate at the SXSW festival about his views on President Trump.

When it was put to him that Solidarity TD Paul Murphy had criticised his decision to meet the US president in the Dáil last week, Mr Varadkar said that Mr Murphy would oppose him from meeting many leaders in the world and that he represented a “minority” view in Ireland.

“I think what is preferable in politics, is politics of engagement – where you actually do speak to people and try and engage with them, see where you have areas of common interest.”

Noting that President Trump was due to potentially meet Kim Jong-un of North Korea, Mr Varadkar said he believed it was on balance a good idea. “Is it such a bad idea?” he said. “What’s the worst thing that could happen?”

The Taoiseach said it was not his job to lecture the president of the United States.

“It’s for each country to make its own choices on migration. I’m in the White House at President Trump’s invitation. I’m not going there to lecture him on American immigration policy.”

Nonetheless, he said he would make clear his belief that migration is very good for his country.

“I now live in a country where 17 per cent of the population were not born in Ireland and we’re all the better for it.”

“It’s a huge bonus for a country to have young people with talent and ability come to your country and bring those skills with them.”

Mr Varadkar said he also plans to raise the issue of the US’ recent decision to impose on steel and aluminium EU imports, suggesting that Irish products such as whiskey could eventually be hit if a trade war escalates. America and Europe “need to work together on the economy and security”, he said. “I would not like to see us drift apart.” He said that he believed that protectionism was in nobody’s interest. “As a policy I can’t imagine how it would be good for anyone. I don’t think it will be good for American, I don’t think it would be good for Ireland and the EU.”

Mr Varadkar earlier met with the Governor of Texas Greg Abbott and is due to visit the Choctaw native American tribe in Oklahoma on Monday.