‘No evidence’ 12-week rule leads to abortions in cases of disability, seminar hears 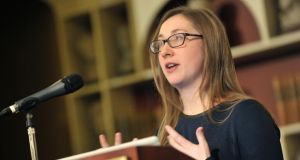 Prof Eilionóir Flynn, director of NUIG’s Centre for Disability Law and Policy, expressed serious concern about the lack of awareness of the position of people with disabilities in the current debate.

A North American expert on abortion law has paid tribute to the Government’s “democratic lawmaking” in opting to hold a referendum on the Eighth Amendment to the Constitution.

“People may change their mind in 20 years, but it is really wonderful that the issue is going to be decided by way of referendum in Ireland,” Prof Carol Sanger of Columbia University told a seminar hosted by the Irish Centre for Human Rights at NUI Galway (NUIG) on Friday.

Prof Sanger cautioned that 45 years after the legalisation of abortion in the United States, the issue was still as “unsettled” as ever, with women still being made to feel “guilty or criminal”.

Regulations that stigmatise abortion still abound in the US, such as mandatory ultrasounds and waiting periods for women seeking a termination, she said. Other examples include legislatively drafted statements that doctors are obliged to read to their patients, presentation of adoption brochures, and disclosure about paternal financial obligations.

Requiring the burial or cremation of aborted foetal remains was another way of making women feel guilty, Prof Sanger said. The impact of this “quasi-criminal status” forced on women seeking terminations was one of the reasons she wrote a book entitled About Abortion: Terminating Pregnancy in 21st century America, she said.

In her book, she presents the US as a case study of how 40 years of decriminalisation has never normalised abortion as a reproductive practice.

“Indeed, the storm around it has become increasingly virulent, especially under the Trump administration,”she said, but she also noted that four US states had recently failed in attempts to determine that life begins at conception.

The Eighth Amendment is not just preventing access to abortion, but also to information, and a comprehensive review of practices and information disseminated in hospitals and clinical settings was required, Prof Eilionóir Flynn, director of NUIG’s Centre for Disability Law and Policy, noted.

She expressed serious concern about the lack of awareness of the position of people with disabilities in the current debate, along with attempts to misrepresent their position and disseminate misinformation and “stigmatise” disability.

An example of this was an assumption that the amendment had “saved” children with disabilities, when the reality was that pre-natal screening was available only after 13 weeks and certain tests could be conducted only after 14 weeks, she said,

There was, therefore, “no evidence” to back up claims that allowing unrestricted access to abortion up to 12 weeks would encourage terminations in cases of disability, Prof Flynn said.

“Most of the debate in the media so far . . . has not included the perspective of disabled people, or has been speaking for them,” she said, at a time when people with disabilities already faced considerable barriers in relation to reproductive healthcare and rights.

Prof Siobhán Mullally of NUIG, who hosted the seminar, noted that Ireland’s “near comprehensive criminalisation” of abortion services treated men and women differently on the basis of sex. Not only did the amendment deny access to reproductive medical services that only women need, but also imposed no such equivalent burden on men’s access to reproductive healthcare.