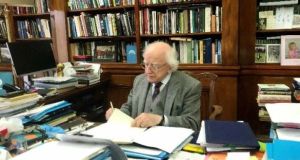 President Michael D Higgins has suggested that “everything will change” as a result of the coronavirus pandemic.

He said the connections between economies and society and also how we define the word security will be transformed as a result of the illness.

He maintained the legislation being brought forward by the Government showed that people were no longer talking about the rollback of the State.

He told RTÉ Radio 1’s Drivetime programme: “What we are witnessing is a forefronting of ethics. It is a time for deepening and extending citizenship and putting it into practice. At the end of it I think we might come out of it a much better people.

“We need now to seize what I call ‘the citizenship moment’ and that we would come out of this having rediscovered instincts of empathy and caring that we may have neglected in favour of more aggressive instincts of individualism of an extreme kind.

“It’s a very good moment for all of us working together. I said in my St Patrick’s Day speech that one of the great gifts of Ireland was intergenerational respect and cooperation.”

President Higgins, who is 78, told presenter Mary Wilson that he has never seen anything comparable in his lifetime to the disruption caused by the coronavirus.

The only thing comparable, he suggested, was the Spanish Flu pandemic of 1918-1919 which killed an estimated 50 million people worldwide including 23,000 in Ireland.

Those dead included the president’s uncle Daniel Canty who was a student in St Colman’s College in Fermoy at the time.

He went home to Liscarroll, Co Cork from school to set up a branch of the anti-conscription league in 1918 where he contracted the flu and died.

President Higgins held a seminar in Áras an Uachtaráin last year about the flu. “We lost so many people and we didn’t want to speak about it. Ireland was going through a time of great change,” he said.

“On this occasion we can learn great things about it (Covid-19). When we come out of it, we could end up with a much better version of the economy where people are at the centre of economic thinking.

“It’s a case of where economic and monetary policy will be adjusted according to the needs of people rather than to the whims of speculative movements.

“At the meetings of the ECB, the IMF and the World Bank, they simply cannot respond to it like they did to the previous crisis in 2008. They are going to have to brace themselves and come forward with positive new connections between societies and economies.”

The President described the pandemic as the “globalisation of vulnerability”.

He said staff at Áras an Uachtaráin are working from home “where possible” and those who have to come in are observing social distancing.

He encouraged people to heed the advice of the Health Service Executive (HSE) this week and to implement the social distancing guidelines.

“The more that is achieved this week, the better it will be for medical staff to climb the mountain they have to climb.”