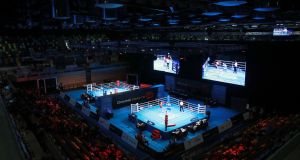 The International Olympic Committee has been accused of putting athletes’ health in jeopardy after two Turkish boxers and their head coach tested positive for coronavirus after returning home from an Olympic boxing tournament in London last week.

Eyup Gozgec, the president of the Turkish Boxing Federation, said all three had caught Covid-19 in London and that the Road To Tokyo event at the Copper Box Arena should have never taken place during a pandemic.

“While the whole world was taking extreme measures to deal with the virus, I am baffled that an IOC taskforce and the British government allowed the tournament to start even though many of us had concerns and almost every other sport had shut down,” he said. “It was irresponsible. And as a result, unfortunately three of our team have now tested positive.”

The Olympic boxing qualifying tournament in London - which featured around 350 fighters from 40 countries - was suspended after three days owing to concerns over the virus and the impact on athletes’ travel arrangements. But even while it was taking place, Franco Falcinelli, the European Boxing Confederation president, warned that the risk of a boxer contracting the virus was “very high”.

Gozgec, who is also the vice-president of the European Boxing Confederation, said he would be writing to the IOC to make a complaint, adding there was not enough medical precautions either at the venue or the hotel where the fighters stayed. He has also sent a letter to other federations, seen by the Guardian, in which he makes his frustrations clear.

“Unfortunately, two of our athletes and our Turkish head coach have tested positive for the new type Covid-19 coronavirus after returning to Turkey from London,” he writes. “All of them are in treatment now and thankfully they are in good condition. This is the disastrous result of the irresponsibility of the IOC taskforce.

“This virus has been around since December 2019. Therefore, it is inevitable to ask why the European qualification event was not postponed before it even took place? They did not consider anyone’s health, which led them to organise this horrible event.”

Gozgec also claimed the event had left the countries involved out of pocket. “While they requested a full upfront payment from all of us boxing federations in Europe for 15 days, they cancelled the events after three days. I am of the deepest conviction that it is time the IOC taskforce gives us a definitive answer on what is going to happen to all of us countries’ hard work and money?”

A spokesperson for the organisers said he had not heard the news but would look into it. The IOC has also been asked for comment. - Guardian

1 Cheltenham faces criticism after racegoers suffer Covid-19 symptoms
2 Andrew Conway diary: In search of a competitive edge
3 Whole new ball game: Sport will be last duck in the row in return to normal
4 Avoid the treadmill at all costs – marathon training in the 2km radius
5 Sonia O’Sullivan: Taming The Tan gave us one last roll of the dice before shutdown
Real news has value SUBSCRIBE