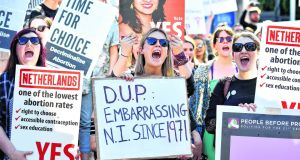 A file photo of an abortion rights rally staged outside Belfast City Hall in May 2018. Abortion services will be available without restriction in Northern Ireland until the 12th week of pregnancy from March 31st. Photograph: Charles McQuillan/Getty Images.

Abortion services will be available without restriction in Northern Ireland until the 12th week of pregnancy from March 31st.

The service will also be available up until 24 weeks if the continuation of the pregnancy would involve a risk to the woman’s physical or mental health greater than that of termination.

Abortion will be available with no time limit in cases of severe foetal impairment or fatal foetal abnormality, or if there is a risk of death or grave permanent injury to the pregnant woman.

The UK government published the legal framework for access to abortion services in the North on Wednesday. Abortion was decriminalised in Northern Ireland in October as a result of legislation passed in the UK parliament.

Under the legislation, only medical professionals - registered doctors, nurses or midwives - will be able to perform a termination.

In the case of terminations after 12 weeks, a certificate must be signed by two medical professionals “certifying in good faith that one of the grounds has been met”.

Conscious objectors will not be required to provide the service, except where necessary to save the woman’s life or prevent grave permanent injury.

In the consultation, respondents were asked for their views on the creation of exclusion zones to protect women accessing abortion services from protesters, as well as the provision of designated spaces where protesters could gather.

Exclusion zones have not been established, but the UK government this would be kept “under review once abortion services have been commissioned and operational in Northern Ireland for some time”.

The minister of state to the Northern Ireland Office (NIO), Robin Walker MP, said that in considering the consultation responses, “we have sought to balance the range of views against our legal obligations, and taken pragmatic decisions informed by evidence, in order to bring forward a new legislative framework that will be operationally sound, that works best for Northern Ireland and that delivers on the government’s duty”.

He said that of the submissions received 79 per cent expressed “a view registering their general opposition to any abortion provision in Northern Ireland beyond that which is currently permitted.

“These views were carefully assessed and noted, recognising the strength of feeling expressed by many. However, the government remains under a legal obligation to introduce a framework,” he said.

The North’s first minister, Arlene Foster, who opposed the decriminalisation of abortion, said it was a “very sad day for Northern Ireland”.