What’s in the historic $2tn US stimulus deal?

Payments to American families from the US Treasury will be worth $1,200 per adult 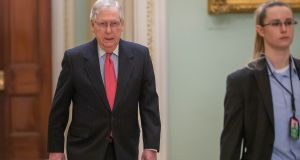 “In effect, this is a wartime level of investment into our nation.”

That is how Kentucky Republican Mitch McConnell, the Senate majority leader, described the $2 trillion (€1.8 trillion) stimulus package agreed early on Wednesday in the upper chamber of Congress.

At a time of major partisan divisions in Washington, US politicians were able to reach a compromise within just a few tense days on a large injection of government money into the economy, to limit the damage from the coronavirus outbreak.

Although the text of the legislation has yet to be released, it is expected to be approved by the Senate later on Wednesday, and then by the House of Representatives, which is controlled by Democrats. The success of the package will depend on how quickly it can be implemented, and there are doubts about whether it will be sufficient, despite its massive size.

Some lawmakers and administration officials have suggested additional funding from Congress may be necessary depending on the pandemic’s economic impact.

Here are the main provisions:

White House officials had earlier this month dismissed the need for direct transfers of funds to US households, but quickly pivoted towards “helicopter money” as it became clear that many families would need income support as the economy ground to a halt.

The payments to American families from the US Treasury will be worth $1,200 per adult, or $2,400 per couple, with additional payments for children. The payments will be phased out starting at annual incomes of $75,000 per person, or $150,000 per couple, so the wealthiest families would not see any benefit.

The legislation sets aside $500 billion for loans to businesses affected by the coronavirus, including $25 billion for passenger airlines, $4 billion for cargo airlines and $17 billion for companies that are “critical to maintaining national security”. The remaining $454 billion would be disbursed through government loans and loan guarantees, including through lending facilities set up by the Federal Reserve.

The $500 billion plan was among the most controversial in the package, with Democrats labelling it a corporate bailout with limited accountability.

In the end, the agreement calls for additional oversight of the fund by an inspector-general, along the lines of the $700 billion Wall Street Troubled Asset Relief Program (Tarp) bailout fund set up during the 2008 financial crisis. Democrats also stripped provisions allowing companies to delay disclosure of their participation in the programme, and got assurances that businesses tied to Donald Trump and his family, as well as members of Congress and heads of executive agencies, would not receive government help.

With some economists estimating that the unemployment rolls will quickly skyrocket to include millions of additional Americans, Congress and the White House decided to increase unemployment benefits by $600 a week for four months, which will come in addition to unemployment payments from the claimant’s state, according to Chuck Schumer, the top Senate Democrat. Payments vary by state, averaging roughly $385 a week.

The US jobless benefit scheme itself was expanded to apply to the self-employed and workers in temporary jobs within the “gig economy”. The original legislation had applied the increase for three months, but Democrats were able to secure one more month in the final stretch of talks.

Mr Schumer called this part of the package a “Marshall plan” for the American medical system. It includes $150 billion in funding for hospitals, personal and protective equipment for healthcare workers, testing supplies, increased workforce and training, and new construction to house patients, according to Mr Schumer’s description of the plan.

Much of the money will be funnelled through state and local governments, which are on the front lines of America’s battle against the coronavirus.

The legislation provides for $367 billion in loans and grants to small businesses, with less than 500 employees, which are bearing the brunt of the impact as Americans practise social distancing measures and many local authorities force non-essential business to temporarily close.

Marco Rubio, the Florida Republican and chairman of the Senate small business committee, said on Fox Business that small business would be able to secure loans worth 250 per cent of their monthly payroll from approved lenders. As long as they used the money to pay employees or rents and leases associated with their businesses, they would not have to return the money, effectively making it a grant.

“This is money that needs to get into these hands very quickly, before these doors continue to close and people keep getting laid off every day,” Mr Rubio said. – Copyright The Financial Times Limited 2020