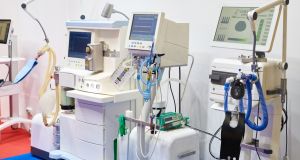 The Covid-19 pandemic created ‘an unprecedented human challenge, and it’s going to require an unprecedented response, and that’s why Medtronic is mobilising all of its capabilities’. Photograph: iStock

Galway-based ventilator maker Medtronic is hoping to make 500 ventilators a week, up from 225 currently, to meet the surge in demand for the life-saving devices in the coronavirus pandemic.

The company had previously only said that it hoped to more than double production and the number of staff working at its Galway facility, making it a “24/7” operation with additional shifts.

Medtronic spokesman Rob Clark disclosed the figures on the number of ventilators the company was hoping to produce in Galway during an interview with a US television station.

“We are examining anything we can possibly do to make that number go even higher,” he said.

In a further move that will free up the availability of ventilators and resources within the medical devices sector, the EU agreed to temporarily suspend new regulations covering medical devices while the pandemic rages.

The introduction of the new regulations may have led manufacturers to decommission older models of ventilators, taking them out of service before the rules come into effect in May.

The decision to postpone the new rules for a year also means that engineers and others working in the sector can focus on increasing the manufacture of new ventilators.

The HSE has ordered 900 new ventilators to add to more than 500 already available in HSE-funded hospitals and more than 900 pieces of equipment or machines that provide respiratory support.

Paul Reid, HSE chief executive, said last week that the health service hopes to continue purchasing at a rate of 100 ventilators a week in response to the crisis.

Medtronic’s facility in Galway has become a front line in the global battle against coronavirus as ventilators keep the most-infected Covid-19 patients breathing while their bodies fight the disease.

Andrew Cuomo, the governor of New York – predicted to be the next hotspot in the global pandemic – has said that “ventilators are to this war what missiles were to World War II”.

New York has between 3,000 and 4,000 ventilators and has purchased 7,000 more but needs at least 30,000 additional ventilators if the state’s health service is to cope with the peak in coronavirus outbreak in the next two weeks.

Mr Cuomo and other elected officials have called on US president Donald Trump to use wartime powers to convert private companies into manufacturers of critical medical supplies such as ventilators.

Mr Clark said that the Covid-19 outbreak created “an unprecedented human challenge, for sure, and it’s going to require an unprecedented response, and that’s why Medtronic is mobilising all of its capabilities and doing everything we can do to up the supply of ventilators around the world”.

“This is an all-out effort – everything that can be done and should be done is being done,” he said.

“Medtech employees can further our efforts and attention to ensure safe and timely access to life-saving devices.”

Fine Gael MEP and first vice-president of the European Parliament Mairead McGuinness said it was time “to press the pause button” on the new regulations “until such time as things return to normal” given the enormous pressure on systems, particularly the medical devices industry.