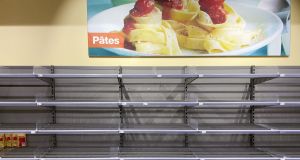 An empty pasta shelf in Switzerland. Many countries have seen surging sales in basic products including pasta. Photograph: EPA

Shoppers’ rush to stock up on non-perishable staples such as pasta and noodles to ride out the coronavirus crisis has boosted demand for wheat, which has risen sharply in futures markets on both sides of the Atlantic.

Analysts noted that in the US, prices have been supported by increased buying by flour millers while in France, shoppers have stockpiled baguettes to freeze, leading some bakeries to ration the nation’s favourite bread.

In the UK, sales of dry pasta were up 55 per cent year on year in the week ending March 8th, according to consumer data research company Kantar.

Mike Watkins at Nielsen, which provides consumer data and analysis, noted that many UK stores had been emptied entirely of pasta, noodles, bread and also rice with anecdotal evidence suggesting a similar picture in Ireland.

Dave Howorth, executive director of Scala, a consultancy, said: “What we’re seeing is stockpiling and panic-buying rippling through the supply chain.”

Wheat prices have also been lifted by efforts among various governments to add to strategic inventories. “The north Africans are buying a lot of grain. Stocks are moving from France to Algeria,” said Abdolreza Abbassian, senior economist at the UN’s Food and Agriculture Organisation.

Heavy falls in emerging market currencies have also revived memories of 2010, when drought and a sharp drop in the rouble prompted Russia – the world’s leading wheat exporter – to ban shipments of grains for almost a year. Last week there were jitters in the market caused by speculation that Moscow and Kiev were considering similar measures.

Prices on the Chicago futures market, meanwhile, have been boosted by an order from China for 340,000 tonnes of wheat the first large purchase since the “phase one” trade deal between Washington and Beijing was signed earlier this year, bringing an end to a spell of retaliatory tariffs.

Vince Peterson, president of US Wheat Associates, described the purchase volume as “significant” and said the deal could be “only the beginning of a new, more productive trade relationship”.

Other grains to have seen an uplift thanks to stockpiling include rice. Prices from key exporters Thailand and Vietnam have risen since the start of the year, said Tosin Jack at Mintec, the commodities information group.

According to the Thai Rice Exporters Association, global demand has surged since the outbreak, with physical Thai rice prices up 14 per cent as of March 18th since the start of January.

Stefan Vogel, global grains analyst at Rabobank, said the outlook for wheat prices rested on the “risk coming from Ukraine and Russia” rather than consumer stockpiling. But he predicted that demand should stay elevated through the remainder of the year. – Copyright The Financial Times Limited 2020