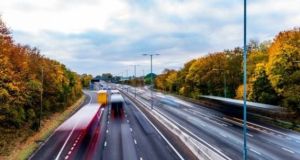 The approved upgrade of the N28 in Cork will ‘have a huge impact on the local communities in Rochestown and Douglas in terms of increased traffic, noise and visual amenity’, local residents have said.

The decision by An Bord Pleanála to grant planning permission for a €220 million upgrade of the N28 road from Cork to Ringaskiddy has been welcomed by the Port of Cork and business interests, but has been greeted with dismay by local residents.

An Bord Pleanála confirmed on Wednesday it had granted planning permission with conditions under the Strategic Infrastructure Act for the motorway, which will run from the Bloomfield Junction on the South Ring Road at Bloomfield Junction to Ringaskiddy in Cork Harbour.

The upgrade will involve the construction of approximately 11 kilometres of standard dual-divided motorway, with two lanes and a hard shoulder in each direction from Douglas to the outskirts of Carrigaline. There will also be 1.6 kilometres of single carriageway from near Carrigaline to Ringaskiddy.

The decision followed a recommendation by An Bord Pleanála Inspector Mary Kennelly, in a 425 page report, that planning permission be granted for the project. It will involve the acquisition of 141.5 hectares of land from over 80 landowners under Compulsory Purchase Orders.

In her report, Ms Kennelly, who chaired an oral hearing into the project that ran for 12 days last November and December, said she was satisfied the community need for the project had been established and the compulsory purchase of the land was necessary to facility the upgrade.

Ms Kennelly found the proposed road and service area in Ringaskiddy would “not result in significant adverse environmental impacts” and she concluded the project was “acceptable in environmental and planning terms”.

Cork County Council, Cork City Council and Transport Infrastructure Ireland all welcomed the decision by An Bord Pleanála, saying the upgrade to motorway status will increase the capacity and safety of the route which links Cork city to Ringaskiddy.

They pointed out that the upgrade will facilitate the decision by Port of Cork to relocate its container terminal from Tivoli on the northern bank of the Lee to Ringaskiddy. This will, in turn, free up 220 hectares of land on the northern banks of the Lee, near the edge of Cork centre for development.

“Regionally, it delivers critical infrastructure for the Port and for the industries . . . on the Ringaskiddy peninsula. The M28 is the transport infrastructure that can lead to improved capacity in the various industries as they continue to compete within their own sectors.

“Nationally, in a post-Brexit era, the Port of Cork is increasingly important as the closest port to mainland Europe and to EU markets. Improved access to Ringaskiddy has been specifically identified in Government’s National Planning Framework - Project Ireland 2040, as a key growth enabler for the Cork region.”

An Bord Pleanála’s decision has also been welcomed by Cork Chamber whose Director of Public Affairs , Thomas McHugh pointed out that the proposed motorway would be “a key infrastructural project (that is) needed for all of Munster and for Ireland”.

Port of Cork chief executive, Brendan Keating also welcomed the news saying that “an adequate road network will enable the Port to provide an efficient service to our customers and to continue to meet the economic needs of the region and future proof Cork as an international gateway for trade.”

However Gerard Harrington, Chairman of the M28 Steering Group, which represents up to 10,000 residents in Rochestown and Douglas opposed to the project, said he was disappointed but not at all surprised by the decision, given recent decisions by An Bord Pleanála.

“An Bord Pleanála when it gave the decision on the incinerator last month mentioned the upgrade of the N28 so I wasn’t surprise, but I was flabbergasted when I read in the order that the proposed development would have ‘no significant negative effects on the local community in the vicinity’.

“I wonder was I at the same oral hearing at all because we showed clearly at the oral hearing that the proposed motorway would have a huge impact on the local communities in Rochestown and Douglas in terms of increased traffic, noise and visual amenity - it’s as if we were just ignored.”

Mr Harrington said the M28 Steering Group would meet over the weekend and consult with their legal advisors on whether or not it may be possible to mount some legal challenge to the decision, as people in the area were bitterly disappointed.