Drought day 13: Heatwave to last at least another week 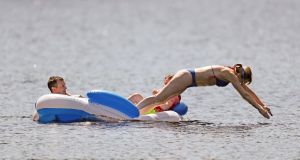 A large part of the country has not experienced rainfall in 13 days with warm and sunny weather conditions expected to continue into early next week.

Met Éireann said high pressure will continue to dominate the weather pattern with a status yellow weather warning for drought or near-drought conditions for the entire country in place until midnight on Friday.

Met Éireann forecaster Jean Byrne said there had not been rainfall in a lot of the country since Wednesday, June 20th.

“There was some rainfall in parts but there’s been drought up to now in the east and south east but our advisory says that will become even more widespread this week,” she told The Irish Times.

“There’s no great change at all for the rest of this week and probably continuing into the early days of next week.

“Our charts go up to 10 days and they’re showing no change Monday through to Wednesday next week.”

Ms Byrne said Met Éireann will review the drought warning over the coming days and whether it may be extended.

Tuesday is expected to be warm and dry with good sunshine with highest temperatures of 27 degrees.

Patchy cloud will develop in southern coastal areas on Tuesday night with minimum temperatures between 9 and 14 degrees.

Wednesday is forecast to be warm and dry in most areas with sunshine. However, cloud will increase from the south and a few scattered showers will develop during the afternoon and evening, most likely in parts of Munster and Leinster.

Highest temperatures will be between 22 and 28 degrees with sea breezes developing in coastal areas.

There will be a sunny start in the east and south on Thursday, which will give way to cloudier, hazier conditions from the northwest during the afternoon.

There will be cloudy conditions with the odd spot of drizzle in northern and western parts of Connacht and Ulster, with maximum temperatures of between 15 and 18 degrees.

By contrast, sunnier conditions in southern and eastern parts of Leinster and Munster will see highs of 25 degrees achieved.

Friday will see a return to dry, warm and mostly sunny conditions with maximum temperatures in the low to mid-20s.

The weekend is set to be warm with sunny conditions and the possibility of light showers. Temperatures may climb into the high 20s in the midlands, east and south.

Fruit grower David Keeling has warned there will be shortages of fruit because of the recent drought, but they will not be as bad as feared.

Mr Keeling said following the cold and long winter a lot of crops are behind, but they have been catching up with the warm weather.

Growers have had to pay more attention and are using a lot more water at the moment, which means that fruit crops will be smaller and sweeter, he told RTÉ’s Morning Ireland on Tuesday.

Grain specialist Bobby Miller said it will be September or October before some tillage farmers will know the full extent of the impact of the extreme weather conditions so far this year.

“The signs are there that there will be a very poor return from farming this year,” he said.