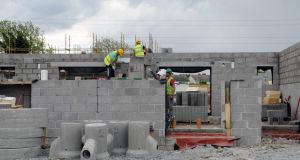 A May 2017 file photograph of social housing being built in Clondalkin, Dublin. Photograph: Irish Times

The tenant-purchase scheme which enables those in social housing to purchase their home from a local authority must be suspended, a report on the future of council housing has said.

The report, commissioned by the philanthropic body Community Foundation for Ireland, also calls for the removal of successor tenancies – which allow children of sitting tenants to inherit tenancies – and for the construction of smaller council housing units so tenants can downsize after their children have grown up.

A total of 365,350 council housing units have been provided in Ireland since the 19th century, and during the 1960s and 1970s one-third of all house constructions were council dwellings, according to the report.

In 2016, council houses accounted for 22 per cent of the total Irish housing stock.

Between 1990 and 2016, some 43 per cent of the 82,869 council houses built during that period were sold to tenants, often with a discount of up to 60 per cent on the market value, writes the report.

Two-thirds of all council housing is now privately owned after being bought through the tenant-purchase scheme, which has been in place since the 1930s.

This had made “an important contribution to increasing home ownership” but has significantly reduced the number of council homes available to rent, warns the study.

The authors said increased pressure on tenants securing private rented accommodation was a “key driver of homelessness” and could be resolved only by providing more social housing.

It says there should be “compulsory deduction of council housing rents” from social welfare payments and a requirement for local authorities to “ringfence income rents” to be spent on council housing management and maintenance.

According to the 2016 Census, 8.7 per cent of households and 30.4 per cent of renters in cities are accommodated in council housing.

The report also calls for a “radical restructuring of funding of council housing” and warns that funding housing through central Government grants has made the “upfront” costs of delivering council housing expensive.

The authors of the report, Prof Michelle Norris and Dr Aideen Hayden from the UCD School of Social Policy, Social Work and Social Justice, argue the European model of funding through loans to local councils discharged over a longer period of time would be more effective and affordable.

Ms Norris told RTÉ’s Morning Ireland programme that loans would provide more stability and move away from the boom/bust system that has operated over the past 30 years.

Historically, social housing had been funded from the central exchequer and during times of recession these types of grants could be difficult to afford, she said.

Capital spending on new council housing rapidly declined after the economic crisis in 2007/8, falling from 94 per cent between then and 2013. In 2013, some €55 million was spent on council housing, but this has since increased to €561 million for 2018.

The report also calls for changes in how tenants pay rents. To date, rents had been based on income, which was inadequate income for local authorities that were then left with funding problems for maintenance, she said.

“Rents [for social housing] need to rise,” said Ms Norris. “The cost to build the house should be reflected in the rent. That will enable the local authority to repay the loans.” She added that low-income families could receive a rent supplement from the Government.

Alan Kelly: Labour party unlikely to enter coalition 09:20
Sunny weather expected with temperatures to reach 18 degrees 09:13
Teaching children the main stress source for families adapting to restrictions 02:53
'It is a scary time' - the nursing homes battling coronavirus clusters 02:29
Coronavirus: Why are men twice as likely to die as women? 02:09