‘Why should I face this professional and social discrimination time and time again?’ 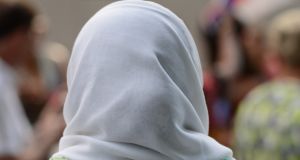 A Muslim doctor living in Dublin has spoken of the insults and harassment she suffers for wearing a hijab. She was speaking after the release of a report warning that hate crime remains under-reported in Ireland.

The “Lifecycle of Hate Crime” report from the Irish Council for Civil Liberties, released on Wednesday, found that hate crime was “not part of the language of the Irish criminal justice process” and the State had a responsibility to “send a clear message to society that hate crime is not tolerated”.

Minister for Justice Charlie Flanagan described the findings of the report as “not acceptable” and said its recommendations would be “urgently” examined by his department.

Amna*, a doctor from South Asia who has been living in Ireland for nearly three years, said racial hatred was “spreading like wildfire” and “requires immediate attention”.

Writing a post on Reddit, Amna described how on Saturday night, while travelling from Dublin city centre to Kilmainham on a Dublin Bus, she was verbally harassed by a female passenger for wearing a hijab. She wrote that a middle aged woman who was “heavily intoxicated” repeatedly asked where she came from, before calling her a “refugee” and asking “why are in you in this country”? She said the woman continued swearing at her, even when she took out her phone and began filming the incident. Eventually, she said, a male passenger offered to swap seats so Amna could move away from the woman.

In Ireland, Amna said she finds that women who wear a head scarf are either considered to be refugees or “someone who deserves an insult in the name of religion”.

When she first arrived in Dublin and was searching for an apartment she said some landlords told her she should “live with her own community”, while one landlord refused to let her enter the house because he said she might have a gun in her handbag. **More recently she said that upon completing an examination, the adjudicator approached her and asked where she was from. When she revealed her home country she said he told her to return there to complete her exams rather that remain in Ireland.

“Why should I face this professional and social discrimination time and time again? Is it because I have opted to adhere to my religious beliefs which teach me to spread love, treat all with respect, do no harm, hear no evil, not to judge others, to be selfless, to be honest, to be non-judgmental towards all?

“Disrespecting others, just for the sake of your personal satisfaction, isn’t acceptable behaviour in any culture or religion. Condescending behaviour, insulting others publicly just because people feel they have the given right to do so is totally unacceptable.”

According to Amna, many Muslim women in this country feel too scared to contact the Garda or report racial abuse. “I think we’ve become desensitised to it,” she told The Irish Times. “People make comments as we walk by so often that we’ve been told to brush it off. But we need to stop brushing it off. We can’t accept it.”

Amna said she often turns to the advice of American TV star Ellen DeGeneres for guidance when faced with discrimination and racial abuse. “When I start to lose faith in kindness due to inappropriate behaviour, I pray and I binge watch her to put my mind at ease. For me it’s a constant reminder, as she rightly says, to ‘please be kind to one another’.”

*Amna’s surname has not been used to protect her identity