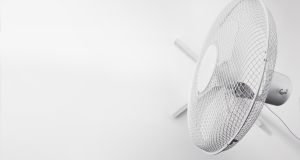 Mags Keogh, who lives near Mitchelstown, said new mothers have been cooling off with mobile fans in Cork University Maternity Hospital, which patients are often bringing in themselves. Photograph: iStock

A woman who recently had a baby at Cork University Maternity Hospital (CUMH) has lodged a letter of complaint amid claims that the isolation room she was in after giving birth registered a temperature of more than 40 degrees.

There is no air conditioning in the hospital’s wards but it is available in the labour rooms, emergency department and operating theatres.

Mags Keogh, who lives near Mitchelstown, said new mothers have been cooling off with mobile fans which patients are often bringing in themselves.

“They only had four fans in the hospital last Wednesday and the nurse did suggest that I get someone to go over to the shopping centre to get me one,” she said. “At one stage the temperature was 42.9 degrees in the (isolation room). I was in my underwear and the baby was in his nappy because it was too hot.”

Ms Keogh, who gave birth to her second child, Patrick, last week, said she was in the isolation room because a risk of contamination arising from a possible bug. However, she said the doors had to be opened because it was “too dangerous” to have a newborn in a room with such a high temperature.

She said it was “cruel” to expect staff to work in that kind of heat.

“They are concerned about patients. They brought in fresh jugs of water all the time. They would come in to check you and baby were fine,” she said.

It is understood the temperature in the nursery at CUMH was exceeded 29 degrees at the weekend whilst the nurses’ stations saw temperatures of above 30 degrees.

Dr Keelin O’Donoghue, a consultant obstetrician and gynaecologist at CUMH, said the maternity unit was designed to be a building where air circulated naturally.

“What happened after construction of the building was the introduction of fire safety regulations, which meant that double doors be put along all the corridors and they could not be left open,” she said.

“I appreciate at the moment we have an unusual heatwave, but to be honest on an average summer parts of the hospital are unpleasantly hot. These last few weeks in higher temperatures have not been easy. ”

A spokesperson for CUMH said it was policy not to comment on individual cases but the hospital was “very aware of the difficult conditions which are being experienced by both patients and staff due to the exceptional weather.

“Mobile air conditioning units have been installed, and the hospital is enhancing the ventilation and cooling of corridors and wards. CUMH will continue to closely monitor ward temperatures while the current heatwave persists.”