No toilets for 500 walkers a day on Kerry mountains 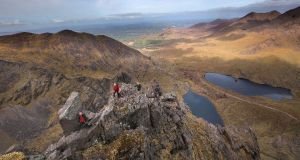 Fine weather is drawing high numbers of walkers to the Kerry mountains, but the volume of human waste being generated is leading to concern.

The lack of toilet facilities to cater for hundreds of walkers each day now on the highest peaks of the MacGillycuddy Reeks, and on other popular hills, will have to be addressed, the spokeswoman for a forum to protect and sustainably manage the reeks has said.

“People going to the toilet on the mountain is a year round issue and one of the big issues facing us on Carrauntoohil,” Ms Deane said.

The fine weather is bringing around 500 walkers each day, through the three main access points and onto Strickeen near the Gap of Dunloe.

Over the years, one of the access routes, Cronin’s Yard, has developed facilities at the entrance. But there is a shortage of facilities and people are going to the toilet on the mountains.

The Reeks Forum – made up of landowners and community stake holders — is meeting shortly to discuss the issue, Ms Deane said.

Meanwhile, waste left this week after campers in the fragile tombola that makes up one of the country’s longest sandy beaches, the rare ecosystem of the Maharees in Brandon Bay, has shocked locals.

The Maharees Conservation Association, formed to protect the area from erosion, has spent days cleaning up after 30 or so people in tents who camped near a bridge and used the sand for toilet facilities. Heaps of bottles and rubbish were also collected.

There were just two campsites and people staying in the campsites helped with the cleanup.

Martha Farrell secretary of the association said they welcomed visitors to the wonderful area, but appealed to them “if you are able to bring it to the beach, bring it home”.

They were asking people to stick to the established paths through the dunes – walking on maram grass holding the dunes in place killed it.

And where possible, people should camp in the campsites, not the dunes,” she appealed.

Extra toilet facilities were needed, but this was not straightforward because the Maharees was an area of conservation, and the dunes were privately owned commonage.

Separately, local councillor for the area Michael O’Shea has called on the OPW and the National Parks and Wildlife Service and Kerry County Council to police areas of conservation such as the Maharees and to stop large groups threatening tourist gems .

Public toilet facilities were needed on the Blasket as well as Skellig Michael. Car parks and traffic management was also needed around the Dingle peninsula.

The county was attracting more and more tourists but was “starved of facilities”, including toilet and parking areas to cope with the increase tourist numbers, he said.