Minister’s stance ‘arises from dissatisfaction with way a case he was involved in... was decided’ 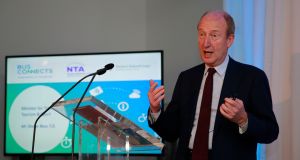 Michael McDowell on Shane Ross (above): “It arises from his dissatisfaction with the way a particular case that he was involved in as a plaintiff was decided. I won’t go further into it. I know the details and I know what we are dealing with here.” Photograph: Nick Bradshaw/The Irish Times

Minister for Transport Shane Ross “is driven by a personal agenda” in pushing legislation on the appointment of judges because of his disappointment with the ruling in a court case he was involved in, it has been claimed.

Independent Senator Michael McDowell made the claim in the Seanad as the Upper House debated the controversial Judicial Appointments Commission Bill, which establishes a commission to appoint judges.

Earlier, an attempt by the Labour Party to postpone debate on the Bill was defeated by 26 votes to 22 after Sinn Féin voted with the Government to proceed.

Labour sought the delay until the full republication of a report by Council of Europe anti-corruption body Greco. The report is described as critical of the process in Ireland for the appointment of judges.

Mr Ross has championed the Bill, which includes a provision that the chair of the commission should be a lay person and not a lawyer or judge.

Mr McDowell asked: “Why is it the situation that the chairperson must by definition be somebody who has never practised law in the last 15 years – that the person should never have been a judge?

Mr McDowell, a former minister for justice, told the Seanad he did not want “to get personal about this”.

However, using parliamentary privilege, he said he knew the background to Mr Ross’s “particular animus” on the issue.

“It arises from his dissatisfaction with the way a particular case that he was involved in as a plaintiff was decided. I won’t go further into it. I know the details and I know what we are dealing with here. That is why he wants this particular provision to be put in place.”

Mr McDowell was warned by the chair of the session, Fianna Fáil Senator Diarmuid Wilson, that the Minister was not there to defend himself and that he “might dispute your contentions”.

Labour Seanad leader Ivana Bacik claimed the Government was making a mockery of the legislative process because it had not seen the Greco report.

Her party colleague Senator Kevin Humphreys said the report had given a “yellow card” to Ireland, but the Government was insisting of pushing the legislation through because of Mr Ross’s “vanity”.

He claimed Minister for Justice Charlie Flanagan, who is leading the legislation through the House, did not believe in the Bill.

‘Deals with the devil’

The Government was pushing it to “keep one Minister on board” and was undermining democracy and “making deals with the devil”.

Independent Senator Victor Boyhan said there was “no reason why we should play blind man’s bluff on a legislative basis while the Government sits on the report”.

Independent Senator Gerard Craughwell said the Seanad was being asked to “buy a pig in a poke”.

Mr Flanagan said the Bill in its current form had improved from its initiation, and would increase the independence of the judiciary.

The Minister said the Government made its laws based on the Constitution, and not on the basis of other bodies on the international stage.

He would bring the Greco report to Government “at the earliest opportunity”, which he said would be on Thursday.