Penneys reopens and plans for 39 consecutive hours next week 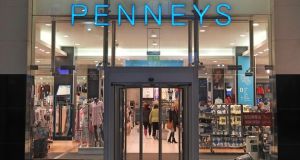 Penneys has also announced that there will be extended opening hours across all 36 of its outlets in the State. Photograph: iStock

Dedicated followers of fast fashion, fans of cheap Christmas jumpers and a particular cohort of insomniacs will be delighted to learn that Penneys plans to keep its stores in Dundrum and Blanchardstown open for a continuous stretch of 39 hours next week once non-essential retail is allowed to resume trading as normal.

The flagship shops in the Dundrum Town Centre and the Blanchardstown Centre will open at 7am on Tuesday December 1st and trade right through to 10pm the following day.

It has also announced that there will be extended opening hours across all 36 of its outlets in the State in order to meet an expected surge in demand in the run up to Christmas period.

Unlike many other retailers of a similar size Penneys has not be able to sell stock online since the start of the most recent lockdown and – if the reopening in the summer is any measure – there are likely to be sizeable queues outside the stores when they re-open.

Penneys has not ruled out opening stores overnight at some points in the weeks ahead.

The retailer stressed that it would have “extensive safety measures in place” including strict social distancing protocols, limits on the number of customers allowed in store, hand sanitisation stations on entry, Perspex screens or cubicles at tills, the use of face masks in-store and increased in-store cleaning.

“We are delighted to re-open our stores in Ireland on December 1st with longer shopping hours to give our customers more time to safely do their festive shopping,” the Penneys chief executive said.

Other large retailers are likely to open for on a continuous basis in the weeks ahead to reduce pressure on customers and staff.

The umbrella group Retail Excellence said last night that non-essential retail outlets which will reopen next week must be allowed to stay open and it has committed to working closely with the authorities to deliver longer trading hours in an effective and safe manner.