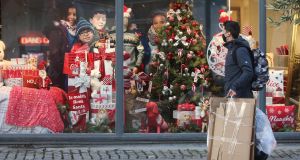 An analysis of data by the CSO shows that life satisfaction was lower during the most restrictive period of the lockdown in April this year, than during the economic crash. Photograph: Collins

The level of low life satisfaction at the height of Covid-19 lockdown measures in April was almost double that recorded during the depths of the financial crisis, figures presented by the Central Statistics Office (CSO) to Government show.

The presentation, which was made during a key Cabinet subcommittee on Thursday evening, was published late on Friday.

It shows that 15.3 per cent of people reported “low overall life satisfaction” in 2013, which compared to 29.6 per cent in April of this year, when the strictest lockdown measures were in place.

The data shows that the number of people who reported feeling depressed or downhearted all or most of the time was also higher, although proportionally the increase was not as significant.

In 2018, when the recovery from the financial crisis was well underway, 8.7 per cent of people reported low overall life satisfaction and 2.8 per cent reported feeling depressed or downhearted most or all of the time.

The CSO presentation also shows labour market trends, which reflect the employment hit in terms of negative job growth, a significant growth in unemployment, and a decline in hours worked per week.

The dramatic rise of working from home is also detailed, with 28 per cent of people in the third quarter of the year reporting home as their main place of work, compared to five per cent in the four weeks prior to the arrival of Covid-19.

The presentation by the CSO, which also trends in the geographic, demographic and statistical progress of the disease, was published alongside presentations from the Department of Finance and consultancy firm EY.

The Department of Finance presentation analysed the growth of the disease across two waves, and the impact on hospitals, as well as the level of testing in the population, and associated positivity rate.

It found that Ireland has interdicted more stringent lockdown measures, and analysed the impact of these decisions on GDP.

Ireland was found to have had a significant impact on GDP of more than 15 per cent, exceeded only by the UK and Spain, which had less severe lockdowns.

Other countries, such as France, Portugal, Croatia and Hungary recorded similar hits to GDP, but had less severe lockdowns.

It also suggests new technical frameworks for considering balancing trade-offs between health and the economy.

The EY presentation analysed State data to examine the relationships between the impact of restrictions, compliance rates and the spread of the disease. Initial findings from the EY data suggests the second wave of the disease was driven by household and social gatherings.

It also suggest that the 14 day incidence per 100,000 of population of the disease, a key measure of growth of Covid-19, began to increase ten days after wet pubs opened in counties where that occurred, and that the areas around University College Cork and NUI Galway saw higher increases than the rest of their counties when those institutions opened.

Northern counties, especially Border areas, also appear to be impacted by their proximity to the Border, it found, while the reopening of construction and non-essential retail don’t appear to have driven a “material increase” in the disease when it took place during the summer, although the research notes the disease rate was low at the time.

The EY data also seeks to establish the impact of specific policy interventions, by comparing the date a given restriction was implemented with the change in the 14 day incidence rate ten days later.

The results show significant increases in most counties driven by the opening of wet bars, and that significant suppression of the disease following the home visits ban on October 16th, then the reintroduction of Level 5 measures.

The data is heavily caveated, however, with the authors warning that they are not precise statistical outputs. They also warn that “care (is) required” when interpreting the data, as often restrictions were introduced in quick succession, and that the analysis does not consider potential behavioural changes beyond the restrictions.

The analysis of specific restrictions extends to the period following the opening of wet pubs, which EY say coincided with the resumption of universities and “specific sporting events”.

It finds that the 14-day disease incidence rate per 100,000 started to increase ten days later in every county, but more slowly in Dublin.

It found, however, that the incidence rate did not increase at first following the three phases of re-opening during late May and early July.