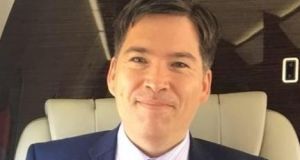 Paul Clarkson said his new role ‘is clearly going to be a big challenge and that is part of the appeal’. Photograph: via LinkedIn

A former journalist who spent almost 20 year working with tabloid newspapers in Ireland and the UK has been appointed as the Government’s new press secretary.

Paul Clarkson will take up his new role on Monday, replacing Lisa-Dee Collery who is switching her focus to Brexit and to working with the Taoiseach’s new Shared Island Unit.

Belfast-born Mr Clarkson told The Irish Times his new role “is clearly going to be a big challenge and that is part of the appeal.”

He said when he returned to Ireland last August, after more than four years working in London, he did so with a view “to trying to help the country in any way I can.

“I have been in journalism for 20 years and I suppose I am taking a well-trodden path. I wanted to do something different when I came back and, like most journalists, I am addicted to politics so when this opportunity came up I was both excited and honoured and grabbed it with both hands.”

He acknowledged that working as press secretary in the current climate would be not be easy.

He expressed the hope that 2021 would be brighter.

Mr Clarkson worked as a news editor with the Irish Mirror before joining the newsdesk at the Irish Sun in December 2005.

He was appointed deputy editor of that newspaper in 2009 and then became its editor in 2013.

In 2016, the father-of-three became a managing editor in the Sun’s London office where he worked until August of this year.