Taoiseach Micheál Martin has announced that the country will move to Level 3 Covid-19 restrictions, "with some modifications", from December 1st. Video: RTÉ 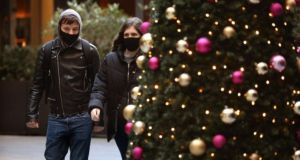 Holohan warns that restrictions may

Taoiseach Micheál Martin last night signalled a cautious reopening of social and economic life for Christmas, overruling the objections of public health experts but disappointing pub owners and others who lobbied for wider relaxation of Covid-19 restrictions.

Warning in a televised address that “each one of us has the responsibility to manage risk”, Mr Martin said “we are going as far as we believe is possible to achieve the best balance of health, economic and social considerations, but no further”.

Speaking after the reopening plan was approved at a Cabinet meeting, he said that “after nine months of learning about how this virus is spreading in our community, one overwhelming lesson has emerged: every contact counts. If we want to stop the virus we must continue to limit contacts outside of a small circle.”

Chief medical officer Tony Holohan warned the Government that restrictions may need to be reimposed during December if there is a fresh spike in cases.

In his letter to the Government, released last night, Dr Holohan expressed opposition to reopening pubs and restaurants if home visits are being permitted. He said “early action will be necessitated if there is a significant increase in incidence from current levels”.

But Government sources pointed to yesterday’s daily infection figures, showing that the 14-day incidence for the virus – a key indicator of its prevalence – had fallen below 100 cases per 100,000 people for the first time since September.

The plan for lifting restrictions is very much along the lines reported in recent days. While the 5km limit for travel has been abolished, people will be asked to stay within their county until December 18th when the restriction will be lifted for a three-week period.

Similarly, the Government says that households should not mix until December 18th, after which people from three homes can come together.

Churches and places of worship will reopen for services on Tuesday with “restrictive measures” in place. Museums, galleries, cinemas and libraries “with protective measures in place” will also reopen next week.

There is also new guidance on the wearing of masks. From next week, people will be asked to wear their masks outdoors on “busy streets, within crowded indoor workplaces and in places of worship”.

From next weekend, restaurants, pubs that have their own kitchens and hotels will be allowed to open. But pubs not serving food will be restricted to providing takeaway drinks.

What about the R number?

It is understood that during Thursday’s meeting of the Cabinet subcommittee on Covid-19 the possibility of reopening wet pubs and allowing children’s team sports was discussed. But Ministers were warned that reopening pubs could add 0.3 to the R number – the rate at which the virus is passed on, dramatically accelerating spread of the disease.

Last night Tánaiste Leo Varadkar said pubs that have been told to remain closed would be given an additional €15,000 in State funds under the Covid Restrictions Support Scheme.

Green Party leader and Minister for Transport Eamon Ryan said the Government is urging Irish people abroad not to return home this Christmas, but he said there is an understanding that some may have to in order to look after parents or to see their children.

Sources said Minister for Health Stephen Donnelly raised concerns about international travel with his colleagues during the meeting. He said he is worried the system for preventing cases being seeded by people coming into the State is not robust enough.