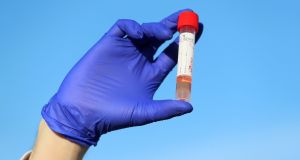 As of 2pm on Saturday, 254 Covid-19 patients were in hospital with 31 of those in intensive care units. Photograph: Brian Lawless/PA Wire

A further 243 cases of Covid-19 have been confirmed in the State. Seven additional deaths were reported by the National Public Health Emergency Team (Nphet) on Saturday.

As of 2pm on Saturday, 254 Covid-19 patients were in hospital with 31 of those in intensive care units.

The number of confirmed cases in hospital as reported by the Health Protection Surveillance Centre (HPSC) is 243 with 13 admissions to hospital over the last 24 hours and 19 discharges.

The numbers in hospital have continued to drop from a high in the second wave of 354 on October 27th. The numbers in ICU have remained steady.

The positivity rate for the last seven days is at 2.7 per cent.

A study by consultancy firm EY into Covid-19 for the Government has blamed GAA county finals for outbreaks of the virus in four counties.

It says that in Cork there was a number of GAA games in early October which coincided with a rate increase.

EY traced an outbreak in Galway to the GAA senior county championship semi-finals and finals in late September and early October which led to a spike in numbers in the Connemara South local electoral area (LEA) 10 days later.

Moycullen won their first ever county title this year.

EY states that a higher incidence rate of Covid-19 in the Ballyjamesduff local electoral area coincided with the victory of Crosserlough in the county final – the club’s first victory in 48 years.

EY also identifies an increase in the Ratoath local electoral area of Meath with Ratoath’s victory in the Meath senior football county final.

On Saturday, epidemologist Dr Gabriel Scally responded to the lifting of Government restrictions on households meeting up to state that visiting relatives at Christmas time is a “dangerous thing to do”.

Dr Scally called on the public to forego meeting up with their families “while the vaccine is on the horizon” and he said he would not be meeting his own extended family.

He warned that, as a result of Christmas meet-ups, “I fear that in January and in February we may be burying some of those friends and relations. That’s the cruel truth of this virus. It is desperately dangerous and we mustn’t let it surge back again.”

On Friday, the Government announced plans to move the country from the Level 5 restrictions it was placed under six weeks ago to a modified version of Level 3 under the Government’s plan for living with the virus. Some changes will come into effect from December 1st allowing non-essential retail, places of worship and cultural institutions to reopen. Restaurants and gastro pubs will be allowed to reopen from December 4th.

Under a planned third phase of the staggered reopening beginning on December 18th, restrictions on household visits and travel between counties are to be eased for a period of three weeks, to allow family and friends to celebrate the holiday together.

This phase will allow households to mix with up to two other households. People will be allowed to travel outside their county from December 18th for three weeks until January 6th.

Dr Scally said the virus is still dangerous and cases are still “at far too high a level” and therefore he stated the Government had gone too far in opening up the country in the run up to Christmas.

“There is a temptation when you have done well to take your foot off the brake, but the virus is still so infectious and dangerous that it could just accelerate away again.

“Why would anyone really want to risk going to social gatherings or large family gatherings at this time?

“This is not the time to do it. This is the time to showing your love for your friends and family by keeping them safe.”

Dr Scally also expressed doubts about whether places of worship should be operating at this time in the run up to Christmas.

“It’s not very long to go before things can loosen up post-vaccination,” he said.

Dr Scally said the situation in Northern Ireland at present is “extraordinarily bad” as a result of not having an effective contact tracing and testing service in place.

He told the Saturday with Katie Hannon programme on RTÉ Radio 1 that he feared a “spillover” and that the only way forward is an all-island approach to Covid-19.

He stated it would be difficult to have mandatory mask wearing in outdoor settings, but that they should be advisory.

“It should be part of the social norm. This advice is coming from the experience of other countries like Asia where mask wearing has become the norm,” he said.

“It is a symbol of respect for other people that you shouldn’t give the virus to other people if you have it.”

Speaking on the same programme, the Vintners Federation of Ireland (VFI) chief executive Padraig Cribben challenged Tánaiste Leo Varadkar to produce the evidence suggesting that so-called “wet pubs” were too dangerous to open.

“What we are relying on is circumstantial not empirical evidence. It is not good enough in a situation where we don’t have the evidence to tell 3,500 business that you can’t open,” he said.

There are 3,500 pubs with 25,000 staff who will not get their jobs back, he stressed and also hundreds of thousands of customers who will not have a social outlet this Christmas.

He said the message from the Government was that it did not trust people.

“We are going to have a large number of communities that will be bereft of any place to socialise over the Christmas period,” he said.