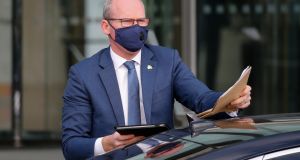 And he has a new book out, which is great news to round off the year.

Endgames: Political Cartoons and Other Stuff 2015-2000 is his 19th collection of drawings with, as he says himself “the odd, decidedly odd, bit of writing”.

Martyn, by the way, became an Irish citizen in March after hanging around this island for more than 50 years and making us laugh. But he remains a lifetime Leyton Orient fan.

“Five years in the making, hundreds of characters, hundreds of thousands of words (if every picture is worth a thousand words) and lots of extras (like a cover, introductions, a few new drawings),” he says. The book charts the past five years in the political life of Ireland and other bits of the world including the Trump legacy, the Covid-19 horror and the Brexit farce, not to mention, well yes, to mention, an election or two, a referendum and a few “gate” events...

Endgames – a play on the Beckett one which doesn’t include Godot – is available in reopened bookshops from next week (€13.99) and from today to Irish Times subscribers via a special pre-sale offer of €10 including p&p.

“Stay indoors, wash your hands and pick up a book, preferably this one,” says Citizen Turner.

And a quick mention for another new book, this one published by a great newsman, Paul Murphy, the former Irish Independent and Evening Herald reporter and Drogheda Independent editor.

Get There First: A Reporter’s Life (€20) is the inside story on his 57 years in the trade, starting in the hot metal days on the provincial beat and moving on to the nationals. Paul, who always had a great nose for a good yarn, began as a cub reporter in the Drogheda Independent, which is where this Dub started out too.

You name it, Paul’s covered it, from the Troubles, the Miami Showband murders, the Dublin planning scandals, industrial unrest, finding a baby in a phone box and almost being shot by an Irish Army hero.

Check out the Get There First: A Reporter’s Life Facebook page for details on how to lay your hands on a copy.

Well done to Simon Coveney for his critical update on Thursday about the lifting of all Covid-19 travel restrictions for Santa Claus and his reindeer as they go about their business on Christmas Eve.

And then the Taoiseach addresses the nation from the steps of Government Buildings on Friday evening and outfoxes Leo by quoting from Fantastic Mr Woulfe. Sorry, Mr Fox.

We thought Micheál was going to cry.

“We can do it. You see if we can’t. You can too,” he gently assured the footless children of Ireland, and them sick with worry over how they’re going to get over the Christmas after him telling them the wet pubs will not be opening this side of God knows when.

But back to the Minister for Foreign Affairs, whose good news announcement was relayed to anxious tots by relieved parents all over the country, and beyond.

The video clip of him breaking the good news from the Dáil’s branch office in the Dublin Convention Centre – or Contention Centre as we hear some in the Labour Party are calling it –went online like lightning and was shared in countless parents’ WhatsApp groups around the country. The clip went everywhere and it wasn’t long before approving messages started flooding in to Coveney’s office from viewers at home and abroad.

Serious Simon played it dead straight, which made his message all the more endearing and convincing.

He said Santa has been cleared for international travel following weeks of planning by his department. “It is important to point out to all children in the country that we regard the travels of Santa Claus as essential travel for essential purposes, so he is exempt from the need to self-quarantine for 14 days and should be able to come in and out of Irish airspace and, indeed, in and out of Irish homes without having to restrict his movements,” he said in a comprehensive message.

Santa is definitely coming, although children will have get to bed early to maintain social distancing to keep him safe, he said.

Coveney Claus detailed his department’s decision following a question from an equally serious Sinn Féin TD John Brady, who sought assurances on the lifting of Covid restrictions. “A representative from the North Pole has been in touch with me also, Minister, just asking whether clearance for Santa Claus to enter our airspace will also be given. This is an important question which is playing on the minds of hundreds of thousands of kids across the country.”

Members of the Minister’s staff were surprised when they heard him issuing the Christmas all-clear from the Dáil. Simon isn’t the impulsive type.

It seems John Brady tipped off the Minister before the session began so he had time to scribble down a few notes before replying.

Both TDs did a great job.

It was a nice example of the new politics.

Is the tie dying out? Not among hard-necked politicos

An interesting column by Gillian Tett in last Saturday’s Financial Times magazine, where she ruminated on the business attire worn by important men and how “one consequence of the Covid-19 lockdown is that it seems to have largely killed off ties”.

The proliferation of Zoom meetings and increasing numbers of people working from home has hastened the loosening of this once-staple sartorial standard.

Tett, editor-at-large and chair of the editorial board (US), explained why men are leaving ties in the 20th century. “Most executives know it pays to look flexible right now. A slip of silk associated with hierarchies does the opposite.”

She says even some politicians appear to be abandoning the tie. While noting Donald Trump and Boris Johnson are still committed wearers, Tett writes: “However, Leo Varadkar, Ireland’s former taoiseach and a GP before he entered politics, is more in tune with the times. In April, he announced plans to ‘burn the tie’, which he said he hated because they ‘grab your neck’ and are an infection-control risk. Since then, few Irish politicians have been seen wearing one.”

Despite his best declared intentions, Leo has neither ditched nor burned his lovely ties when going to work. As for the rest of our TDs and Senators, most are still wedded to their neckties. Clearly they don’t mind them grabbing their necks because those necks are more than hard enough to withstand the pressure.

News from out Dún Laoghaire/Cabinteely way is that former Fine Gael TD Mary Mitchell O’Connor is leaving politics behind for good and embarking on a new career.

The former minister of state for higher education has had a difficult year. Her mother died, she has had a tough time with family illness, she lost her Dáil seat and on top of all that a global pandemic sent the whole country into a tailspin.

“It’s not been nice, but I’m tough – I reared two boys on my own and you have to keep going,” she told us on Friday. During the lockdown months, Mary retrained and is now a qualified executive business coach and mentor.

The former school principal turned TD set up Mitchell O’Connor Consultancy, Mentorship and Executive Coaching earlier this month and things are looking up again for her. “I am an optimist by nature and looking forward to this latest challenge. The business is up and running and going well.”

However, she says she will not be returning to the political fray. Her politics days are over.

“That book is firmly closed.”

Soc Dems rub the Government’s noses in it

This week the Government shot down the Social Democrats’ Dáil motion calling for the ending of State funding for the greyhound industry.

The Oireachtas recently approved a Bill to increase funding for the sector by €2.4 million, bringing the total State subvention for next year to €19.2 million.

Cork South West TD Holly Cairns, who runs an organic farm at Lisheen near Skibbereen, argued these State supports should be used for the welfare of dogs “impacted by breeding and racing associated by the industry”. The party co-leader Catherine Murphy said the State is complicit in acts of animal cruelty by providing the sector with millions in funding each year.

Many rural-based TDs lambasted the Soc Dems for their stance. Chief among them was Fianna Fáil’s Jackie Cahill, who took particular issue with their poster featuring a “greyhound”, brandishing it in the chamber to prove his point. He also criticised a photo opportunity outside Leinster House in advance of the debate featuring Holly Cairns and the same handsome dog.

“The Soc Dems motion today to defund the greyhound industry is yet another urban-based attack on rural Ireland” he railed.

But, worst of all, the “Soc Dems posed today outside Leinster House with a LURCHER, thinking it was a greyhound!!”