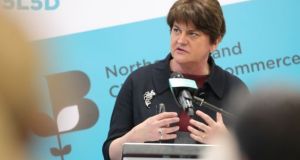 DUP leader Arlene Foster: said there was no suggestion North Belfast councillor Dale Pankhurst had any involvement in, or knowledge of, intimidation or attacks.

The DUP leader, Arlene Foster, has given her backing to a North Belfast councillor at the centre of a controversy over the allocation of housing.

Representatives from the SDLP and Sinn Féin had said the DUP’s Dale Pankhurst had questions to answer over a “concern” he raised with a housing association over the safety of a woman who had been allocated a house in a new development in the predominantly unionist Ballysillan area.

She later chose not to move into the house after the windows were smashed and anti-Catholic graffiti scrawled on the wall.

The Police Service of Northern Ireland (PSNI) is investigating three incidents of criminal damage to three residential properties in the Tyndale Gardens area of north Belfast between November 25th and 29th. These are being treated as sectarian hate crimes.

In a statement, Mr Pankhurst said that as a public representative he “raised a concern to Choice Housing which came to my attention. This centred on the safety of the woman in question.

“I wished to raise this matter in confidence with the organisation.

“I have a duty of care to all residents when I receive any form of information that may indicate danger to life or property,” he said.

In a separate statement, a spokesperson for the DUP said the party and Mr Pankhurst “condemn all forms of intimidation and attacks and therefore condemns [sic] those responsible for this incident”.

The party said it had spoken to the police in connection with the matter, and encouraged anyone with information to contact the PSNI.

Mrs Foster told The Irish Times she had not spoken to Mr Pankhurst personally, but said there was no suggestion he had any involvement in, or knowledge of, any intimidation or attacks. “He denies those allegations . . . and he will be following that up through the appropriate channels,” she said.

Asked if she felt the party should carry out an investigation, she replied that “He denies the allegation. He does not accept that that is the case. ” She added that it was “important that we condemn any intimidation that goes on in any housing development”.

“Again it points to the need to have stability in Northern Ireland and to send a very strong message about reconciliation as well.”

Sinn Féin MLA Caral Ní Chuílín said there should be a full investigation into the “organised campaign of intimidation by criminal and paramilitary elements to prevent Catholics from accessing housing in North Belfast.”

In a statement, a spokeswoman from Choice Housing said the association “allocates all properties in accordance with the Housing Selection Scheme”, and the body could not comment on individual cases due to tenant confidentiality.