Security alert for Dart getting 60-plus passenger texts monthly 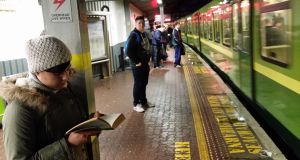 Figures released to The Irish Times show 145 passengers have used the system between its launch and October 18th – on average more than 16 times every week, or more than twice every day.

Irish Rail said these figures are “excluding messages received which did not include any information”.

Irish Rail did not detail the exact nature of the incidents nor the outcomes.

There was one alert each about a couple engaged in “lewd behaviour”, a “couple arguing”, a passenger “trying to set something alight”, someone urinating on a platform, an “individual in distress” as well as a “man asleep and smells”.

There were a further three alerts about vandalism on the trains, three about smoking, two complaints about thefts or attempted thefts, and seven about begging or tissue sellers.

There were also three separate alerts about fireworks being set off on the Dart.

There were another 20 alerts from passengers who were on rail services other than the Dart, for which no details were given.

A number of commuters who used the text alert service said they got an automated response but no further detail about what action, if any, was taken.

A mother who was with her “fairly shocked” 12-year-old daughter on a 7.15pm train from Clongriffin when a firework was thrown into the carriage from the platform at Howth Junction texted an alert as the carriage got “very smoky”.

The woman, who doesn’t wish to be identified, said the only message she got back was: “You have been removed from the texting list for Irish Rail.”

Another commuter said he used the text service to report a man smoking a joint on a southbound train from Tara Street at around 11pm on a Thursday night.

“I got one automatic reply, but I never heard anything since,” he said.

“I’m just not sure about the whole text service system. I just feel that nobody really knows if their complaint is being dealt with or is it just being responded to by a computer-generated text.”

One woman sent an alert while on the Dart to Malahide and a “bunch of kids were kicking the windows, standing on the seats, shouting and swearing at top of their voices”.

She received a text back saying: “Thank you, this is a text service to report anti-social behaviour only. We will alert the right department of the issue you have reported.”

The text also advised her to phone 999 if it was an emergency and “if safe to do so”.

Another passenger, who used the system on a Saturday evening train to Sallins recently when “there were four junkies openly taking drugs on the train . . . brazen as you like”, said he “didn’t even get a text back”.

Fergus O’Dowd, Louth TD and chair of the Oireachtas transport, tourism and sport committee, said the parliamentary watchdog would question Irish Rail bosses about the text system within the coming weeks.

“It’s a very serious matter,” he said. “We want to know what action they took, how they dealt with these incidents, and whether they actually communicated back with passengers who went to the bother of passing on their concerns.”

Mr O’Dowd said the figures showed Irish Rail need to “beef up their security and their response”.

“It is a massive infringement of your rights, your privacy and rights as a citizen if you are not able to travel unmolested,” he said.

Irish Rail spokesman Barry Kenny said the text alert service is similar to those operated by other public transport operators.

“Our security centre co-ordinates what action is appropriate. In some instances, those involved in anti-social behaviour may have already left the train or station within a short time after the report,” he said.

Mr Kenny said the service will be expanded to commuter routes in the coming weeks.