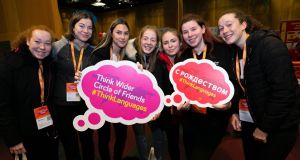 Transition year students at a Languages Connect event at the Convention Centre in Dublin. File photo.

Secondary-school students from Polish, Lithuanian and Brazilian families are being supported to hold on to their mother tongues with new State-funded online classes.

The Department of Education has ambitious targets to diversify and cultivate the uptake of mother-tongue languages.

As part of these plans, almost 100 students in schools which do not have enough numbers to justify hiring a teacher are receiving one-to-one support online by qualified teachers.

About 25 students mainly from north Dublin and Monaghan are receiving online support for Lithuanian, while 50 students mostly in Galway and Cork are getting support for Polish. A further 20 students across the State are registered for Portuguese online classes.

“Our message on heritage languages is that supporting them is not just important for the economic opportunities that these languages may bring, but also for the wellbeing of the students who have different cultural and linguistic backgrounds,” she said.

“Support for the home language in school gives a message of approval and respect, it gives a positive message to students about their language and their culture.”

She also said students develop pride in who they are and confidence to express their views and opinions, as well as staying connected to their wider family.

“These relationships are very important in the context of wellbeing,” she said.

As part of this plan, a number of new languages will be added to the Leaving Cert curriculum in a bid to boost the learning of Polish, Lithuanian, Portuguese and Chinese.

The means these students will be able to follow a set curriculum and undertake oral exams, in the same manner as other languages.

Under a Department of Education strategy, there are plans to put Ireland in the top-10 countries in Europe for the teaching and learning of foreign languages by 2026.

The department is seeking to do this by boosting teacher supply, upskilling existing teachers and providing more foreign language assistants in the classroom to give access to more languages.

There are plans to increase the number of students sitting two languages for State examinations by 25 per cent.

There is also an aim to increase the proportion of the higher-education cohort studying a foreign language, in any capacity, as part of their course to 20 per cent.

However, some secondary schools have warned that a shortage of qualified teachers poses a major challenge to plans to diversity language learning.

It also found evidence of a class gap in access to language tuition, with students in fee-paying secondary schools much more likely to have a choice of languages to study. These schools offered the widest range of languages at both junior and senior cycle.

By contrast, students in non fee-paying schools were more likely to have access to fewer languages, while thousands of pupils are not studying any foreign language at all for the Junior or Leaving Cert.