Trains and security: ‘I tried to pacify the situation’ 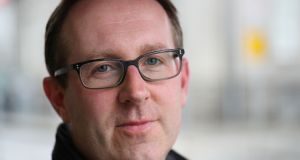 Barry Creed: “The only thing I had available to me was to tweet. Irish Rail replied the following day.” Photograph: Nick Bradshaw

Barry Creed was on the 7.05pm service from Sligo to Dublin on a Thursday evening in recent weeks when two “really out of it” young men staggered into the half-empty carriage carrying a bag of Dutch Gold beer.

A solicitor, he has been working the courts long enough to sense when a bit of bother is about to kick off and he feared just that when the “pretty dishevelled” drunk men sat in beside a “professional looking” middle-aged woman sitting on her own.

“There were loads of free seats in the carriage,” he said.

“We all want to avoid hassle, but right is right and I could see some hassle was about to ensue, so I stood up and was about to suggest to her that she could take another seat, just to diffuse the situation.”

“She was pretty much hysterical, extremely upset,” said Creed.

The pair “squared up” to the young woman as she accused them of sitting beside her shortly beforehand at the other end of the carriage, spilling their beer to cause a distraction and taking her bank and student cards.

Worried that the already-ugly scene was about to get violent, Creed stepped in.

“I’m no heavy-weight. The last time I threw or received a punch was with my brother when I was 10, so I was nervous,” he said.

“But they were very drunk and they were offering to be strip-searched. I thought it was going to blow up at this stage, so I tried to pacify the situation and suggested it might be a mistake.”

A number of other young women had since come to the comfort of the still “hysterical” student, and Creed offered her money so she could get home.

The two men left for the next carriage but not before one of them pulled out “about 20 bank cards and student cards” along with a “considerable” amount of cash, said Creed.

“I called the gardaí and told them what happened and that we were 10km from Mullingar station.”

Only when they arrived at Mullingar, where Creed understands the two men were arrested during a 50-minute delay to the service, did Irish Rail officials speak to those who witnessed the scene, according to Creed.

“One official asked why did nobody call the driver,” he said.

“I told him I didn’t know you could call the driver. I didn’t know of any facility to alert security. Nowhere in my eye line could I see this on the train. The only thing I had available to me was to tweet, so I sent a tweet. Irish Rail replied the following day.”

Over the past two years, Creed said he has seen three similar episodes on the Sligo to Dublin service alone. They all involved drunkenness.

At €47 a return ticket, he expects better.

“The service has got to be safe, reliable and clean, in that order,” he said. “A physical presence of some sort would be a good deterrent, even someone in a high-vis jacket, which can send out a message of an authoritative figure that people react to.”