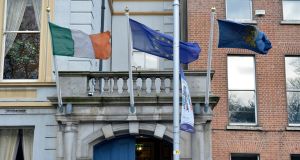 One of the country’s best-known private members clubs has run into difficulties with the planning authorities over the unauthorised erection of flagpoles over the main entrance to its headquarters in Dublin city centre.

The Stephen’s Green Hibernian Club has been refused retrospective planning permission by Dublin City Council for three flagpoles attached to the front of its premises on St Stephen’s Green.

The club sought planning permission for the flagpole after the local authority began enforcement proceedings to have them removed last year.

However, the council has now ruled that the club’s proposal to retain the flagpoles on a protected structure in an Architectural Conservation Area in the historic Georgian core of the city would “constitute a visually obtrusive and inappropriate form of development”.

Council planners said allowing the flagpoles to remain in place would also be contrary to the Dublin City Development Plan 2016-2022 in relation to the protection of listed buildings and would set “an undesirable precedent if permitted for similar developments in this important Renaissance square”.

They ruled the development was “unacceptable” and also contrary to other requirements of planning policy in relation to the Grafton Street area and on guidelines for shop front design.

They state that flagpoles are not an acceptable form of identification of buildings as they can result in visual clutter.

The club said there was historical evidence of a flagpole being attached to the building as far back as the early 1900s which was removed at some stage for health and safety reasons.

It claimed the current flagpoles posed “no undue threat” to the visual amenity of the immediate streetscape or the integrity or character of its own building.

The club said the flags which are flown outside the building – the flag of the Republic of Ireland, the flag of Europe and the flag of the Hibernian club – were “synonymous with reinforcing the stately nature of the existing building”.

The club’s dress code is more casual than in the past but states that all members must be “well groomed and smartly dressed at all times”.

It also states: “For gentlemen a jacket and collared shirt is required. A tie is always welcome but not necessary”.